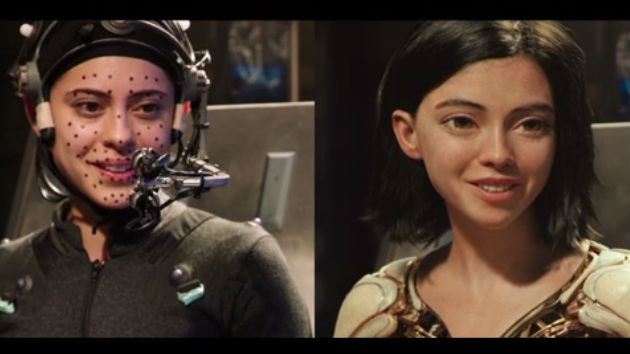 Set in the far future, the film's title character is a cyborg brought back to life onscreen by a gifted doctor, played by Oscar-winner Christoph Waltz. But the character was brought to life by actress Rosa Salazar.

Using motion-capture technology, Salazar worked with a pair of high definition cameras pointed right at her face, and her every movement was translated into a realistic, wide-eyed anime character.

"Oh it was completely breathtaking," she tells ABC Radio. "I mean, it's almost too much for me to watch because it is me, it is my mannerisms it is my performance — only it's outside of myself. It's like having a sister or a child that is also you. It's very strange to articulate. But I'll just say that it's really f****** cool!"

Alita essentially starts as a wide-eyed girl getting used to life in the post-apocalyptic Iron City, home to ruthless cyborg bounty hunters and assorted underworld characters, and then learns she's actually a fierce soldier from a war long ago.

The film was a passion project for Cameron, but he was so busy with his Avatar series that he signed Rodriguez, a friend and fan of the Terminator creator, to direct.

Rodriguez, famous for hits like El Mariachi and the Spy Kids films, said he wanted the job because he "just wanted to see this missing Jim Cameron movie!"