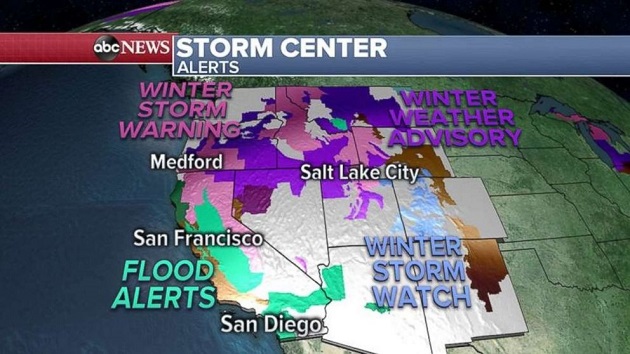 ABC News(NEW YORK) — Multiple storms are bearing down on the West Coast, while the system that delivered snow and rain up and down the East Coast on Tuesday is finally moving out.
The highest reported snowfall on Tuesday was nearly 20 inches in Elk Mound, Wisconsin, as parts of New York state saw more than 19 inches. Parts of New England may see another foot by the end of Wednesday morning.
The major East Coast storm is moving through northern New England Wednesday morning and into southern Canada, with heavy snows and ice in Maine.
As the storm heads north, the Northeast and parts of the Great Lakes may see wind gusts of up to 50 mph. The system should depart New England by Wednesday night, leaving behind similarly windy conditions.
Lake-effect snow showers are expected in western Pennsylvania and western New York, areas that could see another 2 to 3 inches of snow.
Multiple storms are targeting the West Coast throughout the end of the week.
Rain and snow will continue at least into Friday, possibly throughout the weekend, with alerts for Wednesday already issued.
Half a foot of rain will be possible in California's coastal hills, creating conditions that could lead to landslides or mudslides.
The snow-capped Sierra Nevada could see another 8 feet of snow over the following few days.
Heavy rains are expected around Phoenix and could lead to flash flooding, meanwhile the Rockies could see another 2 feet of snow.