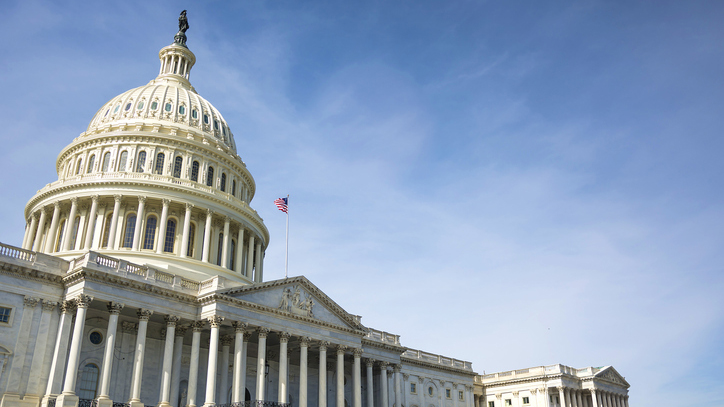 rarrarorro/iStock(WASHINGTON) — Congressional negotiators on Wednesday were scrambling to hammer out the final language of a bill based on their "agreement in principle" on border security, as lawmakers and President Donald Trump said they needed to review the detailed text ahead of a vote as soon as Thursday afternoon.
Trump said he is reserving judgment on whether he'll sign the measure until he sees the final text, though the president has indicated he is warming up to the deal after receiving a briefing Tuesday on its parameters from Sen. Richard Shelby, the top Republican negotiating on behalf of his party.
“We’re looking for landmines,” Trump told reporters in the Oval Office on Wednesday. “A shutdown would be a terrible thing. I think a point was made with the last shutdown. People realized how bad the border is, how unsafe the border is and I think a lot of good points were made, but I don't want to see another one.”
Details of the agreement are beginning to emerge, though without money for the "big, beautiful wall" prototypes the president touted on the campaign trail.
The president initially said he was "not happy" with the deal but Senate Majority Leader Mitch McConnell encouraged Trump to sign it, adding he supports the president taking executive action to “make up the difference" by utilizing "whatever tools he can legally use to enhance his efforts to secure the border.”
As a Friday midnight deadline rapidly approached to stave off another partial government shutdown, lawmakers were seeking political cover from an agreement nobody seems all that excited to support.
House Speaker Nancy Pelosi called the deal “a compromise” and “a win for the American people.”
“I’m proud of the work they’ve done but as with all compromises, I say to people, support the bill for what is in it, don’t judge it for what is not in it,” Pelosi told reporters Wednesday in the Capitol. “We have other days to pass other legislation.”
Sources expect the bill text will post online Wednesday evening – “at the earliest.” The House of Representatives is expected to debate and vote on the agreement first, before sending the bill to the Senate for consideration.
Democrats had long insisted that they would not support even one dollar for the president’s border wall, and the bipartisan pact includes $1.375 billion to build a physical barrier on the southern border – enough to construct about 55 miles of new fencing in new geographic areas.
While that’s even less than the $1.6 billion that Trump first rejected in December, triggering the record long 35-day government shutdown, Democrats have found solace that the sum is a far cry from the $5.7 billion Trump had demanded.
“This legislation is a product of trying to find common ground,” House Democratic Caucus chairman Hakeem Jeffries, D-N.Y., told ABC News. “We made clear from the beginning that we would not support funding for a medieval border wall that would be built from sea to shining sea. We also indicated that we were prepared to support evidence-based barriers where necessary.”
“The conference committee has come together and concluded that it is reasonable to support 55 miles of additional barrier in a manner that is consistent with our evidence-based approach to find common ground and improve the security along our border,” Jeffries said.
The agreement prohibits the construction of a concrete wall or other Trump wall prototypes – specifying that only “existing technologies” for border barriers can be built – including bollard and steel slats barriers — the same style of structures that were built along the border before Trump took office.
“It’s abundantly clear that this is not the $5.7 billion for the president’s concrete wall,” New Mexico Democrat Ben Ray Lujan said. “There’s not any money for the president’s concrete wall in here as I understand it.”
Rep. Kay Granger, the ranking Republican appropriator, boasted Wednesday morning that the deal authorizes structures 30-feet high consisting of steel filled with concrete and claiming the fence the bill outlines is the wall the president wants.
"The fence that the president outlined in his State of the Union, the fence, we call it the wall, the most important by far, it's steel packed with concrete. It's in some areas 30 feet high. Other areas 18 feet high,” Granger, R-Texas, said. “It absolutely is what we need to slow down, have the technology in that wall to make sure the border patrol can get there as quickly as possible and stop them from coming across. It can't be driven through, it can't be cut through so it's certainly the one we need."
The framework also reduces ICE detention beds from 49,057 today to 40,520 at the end of the fiscal year September 30, representing a 17.4 percent reduction that Democrats believe will provide a critical check on the Trump administration’s “mass deportation agenda.”
“You’ve got good and bad in there. We’ve got to judge the good over the bad side of it,” Rep. Mark Pocan, the co-chair of the Congressional Progressive Caucus said. “There’s good and bad in every deal, but this allows us to move on with all the other priorities we want to move on with.”
In addition to homeland security appropriations, Rep. Tom Cole, second-ranking GOP appropriator, claimed victory in that the bill will also cover six other areas of government funding that all lapsed during the shutdown.
“We're getting everything we wanted and the Democratic House is voting for it," Cole, R-Oklahoma, said.
The bill must first be signed by a majority of 10 House conferees, and also a majority of 7 Senate conferees. If that happens, both chambers must then vote to send it to the president’s desk by midnight Friday.