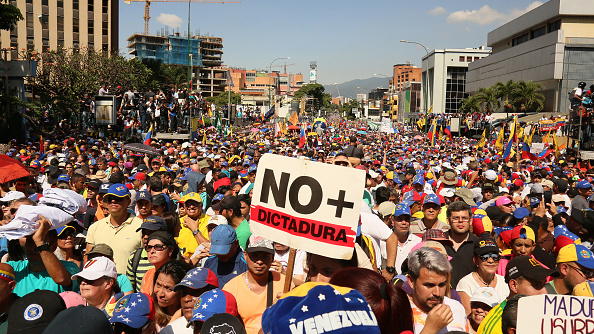 Edilzon Gamez/Getty Images(CARACAS, Venezuela) — Venezuela’s growing parallel opposition government extended its reach to the all-important oil sector on Wednesday when the country’s National Assembly moved to appoint new boards of directors to the state oil company and its refiner CITGO.
The appointments include high-profile opposition names like David Smolansky, a former Caracas area mayor who fled the country in 2017 under threat of arrest for his role in anti-government protests.
The move promises to further escalate the already-tense political standoff between President Nicolas Maduro and opposition leader Juan Guaido, who has claimed the presidency as his own.
On Tuesday, Guaido set a date – Feb. 23 — for accepting dozens of tons of humanitarian aid currently held up on the country’s border, in defiance of Maduro.
“I hope the humanitarian aid gets in, and if it has to happen through a military intervention, just let it be quick,” Eglar Torre, 63, told ABC News in Caracas on Wednesday. “If this crazy man continues in power, this will all end in a civil war.”
The political crisis has been fueled by an ongoing economic and humanitarian crisis that has resulted in spikes in child malnutrition and shortages of basic foods and medicine.
“This has affected us so badly,” said Torre, who works as a travel agent. “Our business has fallen apart.”
But not all Venezuelans support the idea of a military intervention, which has been mentioned frequently by U.S. President Donald Trump.
Speaking to the growing Venezuelan diaspora in South Florida recently, Vice President Mike Pence said “all options were on the table” to resolve the conflict.
“I just hope that eventually these two sides come together and this can all be resolved,” Maricela Barrios, 42, who works as a secretary, said on Wednesday in Caracas. “The last thing we want here is war.”
Guaido’s declaration that he would allow humanitarian aid to enter the country by Feb. 23 puts an ultimatum on the country’s armed forces. While at least one general and some diplomatic staff around the world have defected in support of Guaido, the military has continued following Maduro’s orders.
Short of using military force, it’s unclear how the 35-year-old lawmaker would successfully get the supplies across the border and distribute them among the population. While Guaido has collected signatures of Venezuelans willing to help in the effort, transporting the aid throughout the country would be nearly impossible without the military’s acquiescence, as they frequently set up checkpoints on major highways.
“Guaido can make this happen if he applies the law, which gives him the authority to authorize it to happen,” said a man named Wilfredo who works in the country’s foreign trade ministry. “This is something that we need and however he can do it, he’s in charge.”
He added he wasn’t afraid to speak out on the issue even though Maduro’s government has cracked down on dissent.
“If they fire me, that’s better for me,” he said. “We don’t make any money anyway.”