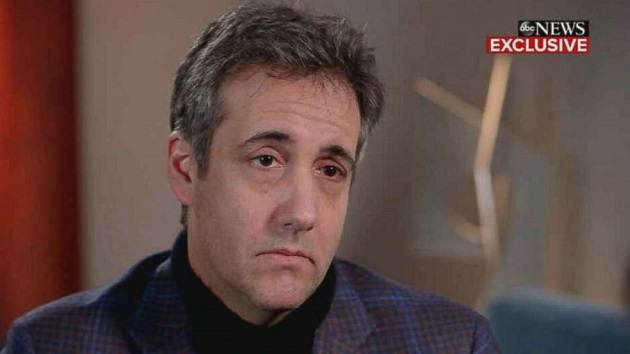 ABC News(WASHINGTON) — A photo showing Michael Cohen out on the town after postponing his congressional testimony due to “post-surgery medical needs” prompted a fiery rebuke from the Senate Intelligence Committee’s leading Republican on Tuesday.

"I can assure you that any goodwill that might have existed in the committee with Michael Cohen is now gone," Sen. Richard Burr, R-N.C., said on Capitol Hill Tuesday afternoon, adding, "you got on Twitter a reporter reported he was having a wild night Saturday night eating out in New York with five buddies, didn't seem to have any physical limitations, and he was out with his wife last night.”
Burr was referring to an image posted to social media allegedly showing Cohen out to dinner at a swanky Manhattan restaurant, L’Avenue. The photo was apparently taken on Monday night, just hours after Cohen backed out of a planned interview with the panel. But a spokesman for Cohen took issue with the senator’s characterization of his client’s actions.
“Despite Senator Burr’s inaccurate comment, Mr. Cohen was expected to and continues to suffer from severe post shoulder surgery pain, as confirmed by a letter from his surgeon, which was sent to Senator Burr and Senator Warner,” Cohen’s attorney, Lanny Davis, wrote in response late Tuesday night. “The medication Mr. Cohen is currently taking made it impossible for him to testify this week.”

Prior to Monday’s postponement with the Senate Intelligence Committee, Cohen had already pressed pause on two other scheduled hearings in the House of Representatives, citing “threats against his family from President Trump and Mr. Giuliani.”

Trump denied the allegation and said Cohen was not threatened by him, but is "threatened by the truth."
The House Intelligence Committee announced last week that Cohen’s closed-door testimony had been postponed until later this month. In January, Cohen pulled the plug on a scheduled open hearing before the House Oversight and Reform Committee.

“It should be noted that Mr. Cohen committed to all three committees that he would voluntarily testify before the end of the month,” Davis said Tuesday.
Cohen is due to report to prison by March 6, when he begins a three-year sentence handed down last month after he pleaded guilty to financial crimes, lying to Congress and campaign finance violations. Burr suggested that if Cohen does not voluntarily appear before then, he could issue another subpoena for his testimony.
"I would prefer to get him before he goes to prison," Burr said. "But you know the way he's positioning himself not coming to the committee, we may help him go to prison."
Copyright © 2019, ABC Radio. All rights reserved.