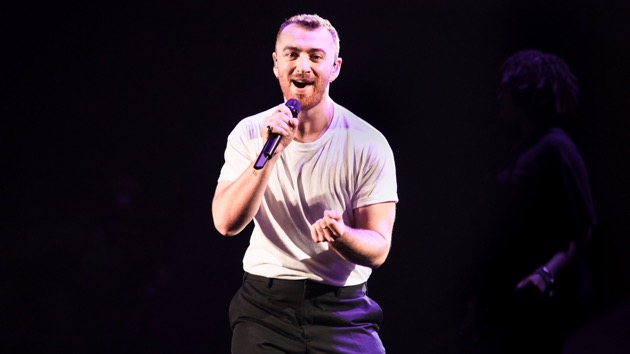 VCG/VCG via Getty Images
Posted on February 13, 2019 by ABC News

VCG/VCG via Getty Images(LONDON) — Sam Smith recently opened up about his own body image insecurities and how he's learned to love himself.
The Grammy-award winning singer shared a shirtless photograph of himself on the beach on Tuesday and wrote in the caption about his struggles to accept his body size, and addressed what he wrote were the dangerous lengths he's gone to while preparing for photo shoots in his career.

"In the past if I have ever done a photo shoot with so much as a t-shirt on, I have starved myself for weeks in advance and then picked and prodded at every picture and then normally taken the picture down," he wrote.
"Yesterday I decided to fight the f— back," he continued. "Reclaim my body and stop trying to change this chest and these hips and these curves that my mum and dad made and love so unconditionally."
"Some may take this as narcissistic and showing off but if you knew how much courage it took to do this and the body trauma I have experienced as a kid you wouldn’t think those things," he added.
Smith also mentioned the photographer, Ryan Pfluger, and thanked him for his support.
"Thank you for helping me celebrate my body AS IT IS @ryanpfluger I have never felt safer than I did with you," he wrote. "I’ll always be at war with this bloody mirror but this shoot and this day was a step in the right f—— direction."
Many fans and celebrities commented on the post, adding messages of encouragement and appreciation for the singer.
"You LOOK GREAT SAM!!! I have an idea of that journey, and I am TOO PROUD of YOU! Xo," Kelly Rowland commented. "You look absolutely beautiful and healthy and you always have to me," Brandi Carlile added.
Smith shared his reaction to the incredible support he received.
"All your comments and support after my post today has made me so emotional," he wrote in an Instagram story. "Feeling so free for the first time in a long time."
"Posting that picture today felt so incredible and I just want to say to all my followers, (if you feel comfortable) PLEASE tag me in your own pictures of BODY LOVE & Acceptance. Let's celebrate this s— together," he added. He later reposted the fan images to his story to share the love.
Smith has spoken publicly about body image and learning to love himself before.
In an interview for V magazine with Sarah Jessica Parker last year, he said that he was "a bit obsessive" over his size towards the start of his career.
"When I was shooting my first music videos, I just wasn’t happy with the way I looked, so I was trying to control the way the camera moved. I got a bit obsessive," he said. "I was constantly looking in the mirror, pinching my waist, weighing myself every day."
"I’ve gotten to a place where I really love my stretch marks and I just enjoy my body," he added.
Although he's found his confidence and learned to embrace his own skin, he admitted that these problems will likely resurface throughout his life.
"My body image is always going to be an issue," he said. "I need to constantly train myself to watch the right sort of films, to not look at certain ads and think that’s how my stomach should look. It’s something that I’m fighting every day."
"I think men should talk about it more," he added.
Copyright © 2019, ABC Radio. All rights reserved.

Mr. Smith goes to Washington? Will Smith expresses interest in political office
Judge returns to bench after son’s murder: ‘I will not be frightened or be afraid to do what I love to do’
Zendaya corrects gendered question about her love life
Marvel movie baddie Frank Grillo on his work ethic, and his “crazy, real” movie ‘Body Brokers’
Jada Pinkett Smith launches eco-conscious Hey Human personal care brand
Massachusetts schools may soon return to full-time in-person learning