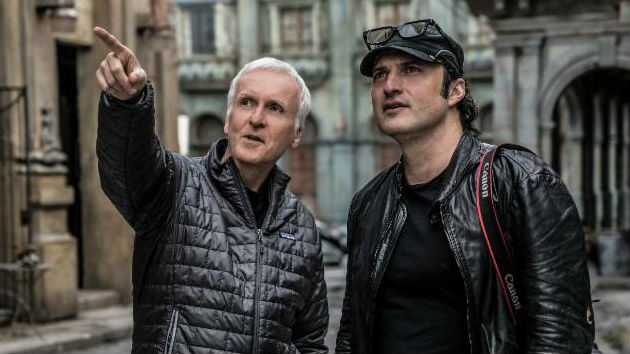 (l-r) Producer James Cameron and Director Robert Rodriguez on the set of ALITA: BATTLE ANGEL/Rico Torres(NEW YORK) — Alita: Battle Angel, a new film based on a beloved graphic novel series, opens Wednesday. The movie was a passion project developed for decades by Oscar-winner James Cameron, who became too busy with his Avatar series to shoot it himself.

Stepping into his shoes was his fan — and friend — Robert Rodriguez. Rodriguez, famous for the micro-budget hits like El Mariachi, its spin-off Desperado, and the Spy Kids movies, told ABC Radio what drew him to Alita.

"I usually stayed away from bigger movies because I liked the freedom that I had on a lower budget…but this was a chance to make a Jim Cameron movie," Rodriguez said. "And [I've] known Jim for many years, we tried to work together before and and I always loved this idea of him doing Battle Angel."

"When I found out he couldn't do it, I looked at the script and just loved what he had written," he continues. "I thought, 'I could go do it in your place because I just want to see this movie — I want to see this missing Jim Cameron movie!'"

"I think that you need to have a character if she's going to be photo-real CGI, I think she needs to be warm," Salazar explains. "If you don't like her, then everything tends to alienate the viewer.

In the film, Alita is brought back to life by a gifted cybernetics doctor, played by Oscar winner Christoph Waltz, however she soon discovers her true identity: as a fearsome soldier from an apocalyptic war long ago.