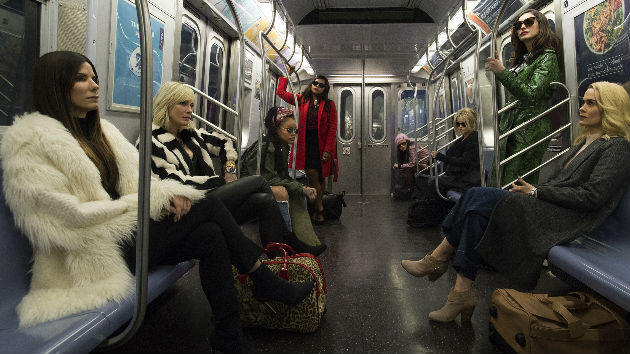 Warner Bros. Pictures/Barry Wetcher (LOS ANGELES) — From Lady Gaga's Oscar-nominated turn in A Star Is Born to the female-led cast of Oceans 8, 2018 was a great year for women in movies, according to a study by the USC Annenberg Inclusion Initiative.

The study, obtained by Variety, shows that of the year's top 100 highest-grossing movies, 40 featured women in either leading or co-leading roles — an increase of eight films from 2017 and 20 more than in 2007.

Of course, women and minorities still have a way to go to gain parity with their male counterparts, but at least Hollywood seems to be getting the message. In fact, 28 of the top 100 movies of 2018 featured an underrepresented lead or co-lead, according to the report. That’s a net gain of seven films from 2017 and a 15-film gain from 2007.

The news wasn't good, however, for Native women and women from the Middle East, who had leading roles.

Hollywood also seems to be casting older women. The study shows 11 of last year's top 100 films, including Jamie Lee Curtis and Sandra Bullock’s respective turns in Halloween and Ocean's 8, featured a woman 45 years of age or older. That’s more than double the number in 2017.

Additionally, the study found that each of the seven major studios had at least one woman of color in a leading role in 2018, and all but three were closely proportionate to the U.S. population when it comes to movies with female lead characters. The top performer was Sony, followed by Lionsgate, Paramount and Universal.

New Orleans police officer fatally shot at high school basketball game
Plant-based diets reduce risk of heart disease, dementia, study finds
Walton Goggins on playing against type as a grieving dad, in CBS’ hit ‘The Unicorn’
Gyms with maskless users shown to be at high risk for COVID spread: Study
People with antibodies after COVID-19 may have short-term virus protection: Study
One more hit of wintry weather before spring-like conditions for Eastern US