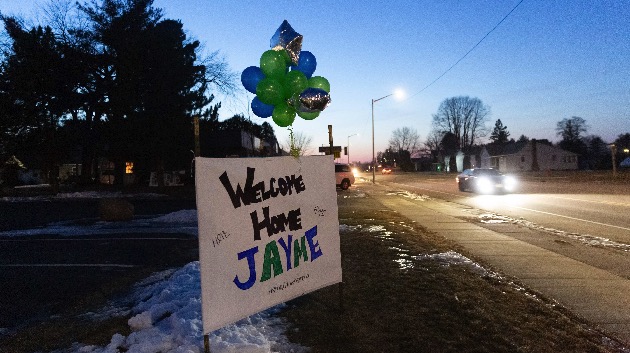 KEREM YUCEL/AFP/Getty Images(BARRON, Wis.) — Jayme Closs, the 13-year-old Wisconsin girl who was allegedly kidnapped from her home and held captive, has released a new statement with her family, one month after she made her daring escape to freedom.
“Jayme and her family wish to extend their deepest gratitude for the incredible gifts and generous donations that she has received from all over the country and around the world," Closs and her family said in a new statement. "Jayme greatly appreciates each and every gift, as well as the many cards and letters," the statement said. "The many kind words have been a source of great comfort to her."
Jake Patterson, 21, allegedly abducted Closs from her home in rural Barron, Wis., after gunning down her parents on Oct. 15.
Patterson confessed to investigators that he targeted Closs after seeing her board a school bus, according to a criminal complaint.
He told investigators that, after the killings, he fled with the girl to his home in Gordon, Wis. He allegedly created a space for Closs under his bed, and when he'd leave the house, he'd put barbells and free weights around the bed so she couldn't escape, according to the complaint.
Closs told investigators that Patterson "would make her stay under the bed for up to 12 hours at a time with no food, water or bathroom breaks," according to the complaint.
On Jan. 10, when Patterson left the residence, Closs fled to safety, according to court documents.
Patterson was arrested and charged with two counts of first-degree intentional homicide, kidnapping and armed burglary. He is set to be arraigned on March 27.
Patterson's father, Patrick Patterson, told ABC News last week, "I'm very sorry for everything that has happened. … I wish for a complete healing of Jayme's mind, heart and soul."
Copyright © 2019, ABC Radio. All rights reserved.

Vivek Murthy to talk about his own family lost to the pandemic in nomination hearing
Texas doctor discusses firing over alleged COVID-19 vaccine theft: ‘I did what I believe was expected’
Shake Shack kicks off chef collaborations each month in 2021
Family of boy who died in Texas deep freeze files $100M suit against power companies
Family farm brings calves into the kitchen with South hit by record cold
Rutgers President Releases New Book, “The Cause of Freedom”