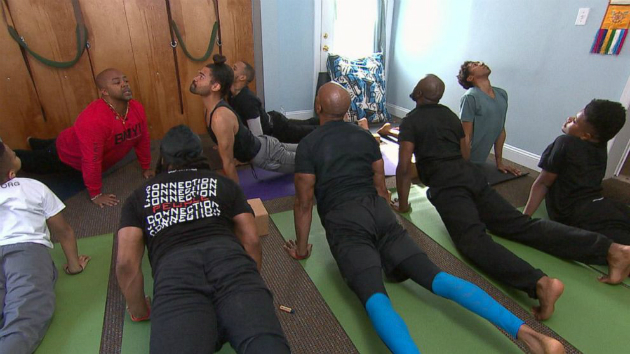 ABC News(NEW YORK) — Yoga instructor Changa Bell is on a mission to create a safe space for black men in his community to open up, breathe and "heal" together through yoga.
Bell said he was hoping to create a place where black men in his community could feel welcome practicing yoga.
"Ultimately, that led to me founding the Black Male Yoga Initiative, because black men in particular were being isolated by the yoga community," Bell told ABC News' Good Morning America.
"We're marketed as over-sexualized, hyper-violent, hyper-masculine," he added. "I wanted to make … a huge welcome sign that said, 'You're welcome here and come and heal.'"
Shawn Burnett, one of the patrons of his yoga practice, told GMA that, "Anything that takes away from your masculinity is seen as negative especially among black men."
Another patron, Ibrahim Auguste, said the studio is a place where they can "express" difficult aspects of their life and find "balance."
"Trauma is deeply intertwined in our existence," Auguste said. "We get to express it here."
"Yoga brings balance," he added. "It puts everything I've ever went through into perspective."
The creation of the Black Male Yoga Initiative comes at a time when black people are 20 percent more likely to experience serious mental health problems than white people, according to the National Alliance on Mental Illness.
Yet only a quarter of black people actually seek professional mental health care, according to NAMI. Instead, many rely on faith and family for emotional support.
For several years, Bell said he himself lived an unhealthy lifestyle and was a heavy smoker and drinker. After a serious heart condition left doctors recommending a pacemaker, Changa decided he needed to turn his life around and started with yoga.
Burnett told GMA that the yoga practice also creates a sense of community for the black men who join.
"It's important for us to have these conversations for one among ourselves because we start to believe the stories that are being told about us," he said. "We're loving our communities. We're loving our families. We're husbands and we just need to get out there."
Copyright © 2019, ABC Radio. All rights reserved.