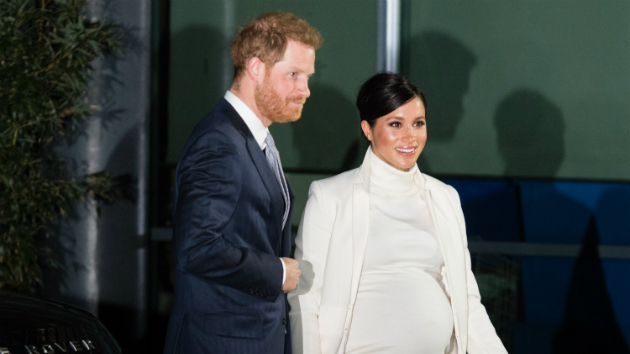 Samir Hussein/Samir Hussein/WireImage(LONDON) — Prince Harry and Meghan Markle, the Duke and Duchess of Sussex, are expecting their first child this spring.
Meghan, 37, and Harry, 34, announced the pregnancy in October, just as they kicked off their 16-day tour of Australia, New Zealand, Fiji and Tonga.
Meghan's every move has been scrutinized ever since, from her maternity fashion choices to her bump cradling. Through it all, Meghan has kept up a relentless pace of engagements, including the recent announcement of her four charitable patronages.
As we await the birth of the royal baby — aka Prince George, Princess Charlotte and Prince Louis' cousin — here is everything we know so far:
When the baby will arrive
Meghan told a well-wisher during a recent visit with Harry to Birkenhead, Merseyside, that she is due in April.
When her pregnancy was announced in October, Kensington Palace said only that Meghan was due "in the spring."

Where the baby will be born
Kensington Palace has not announced where Meghan plans to deliver her first child.
Meghan's sister-in-law, Duchess Kate, gave birth to all three of her children at the Lindo Wing at St. Mary's Hospital Paddington in London, where the late Princess Diana also delivered both Prince William and Prince Harry.
Meghan and Harry may also choose to deliver their baby somewhere else in London or somewhere closer to their new home in Windsor.

How the baby's birth will be announced
When Meghan gives birth, Queen Elizabeth and the royal family will be notified before a public announcement is made.
Meghan and Harry could follow tradition in publicly announcing the birth by having a statement posted on an easel in the forecourt of Buckingham Palace. They could also choose to do things their own way.
When each of William and Kate’s three children were born, a statement was posted at Buckingham Palace, bells tolled, and there was the traditional gun salute as the country celebrated the new heir.

Where the baby will live
Harry and Meghan will soon move to Frogmore Cottage on the grounds of Windsor Estate, about 30 miles from London.
Windsor is home to Windsor Castle, the largest occupied castle in the world and a special place for Harry's grandmother, Queen Elizabeth II. Meghan and Harry's wedding last May took place at St. George's Chapel at Windsor Castle.
"Windsor is a very special place for Their Royal Highnesses and they are grateful that their official residence will be on the estate," Kensington Palace said in a statement announcing the move.

How the baby may make history
U.K. media outlets have reported that Meghan and Harry's baby will hold dual American and British nationality, a first for a royal baby.
Meghan, a California native, will reportedly still be waiting on her application for British citizenship to be approved when she is due to give birth.
At the time Meghan's engagement to Harry was made public in November 2017, Kensington Palace announced that Meghan would become a naturalized citizen of the U.K.
Despite marrying a member of the British royal family, she still has to pass a test on British culture, history and traditions in order to become a U.K. citizen.
Meghan will be compliant with all U.K. immigration requirements as she undergoes the process of becoming a British citizen, which can take several years, Kensington Palace said in November. She will retain her U.S. citizenship during that time.

Where the baby will fall in the line of succession
The boy or girl will be seventh in line to the British throne, after its grandfather, Prince Charles, uncle, Prince William, three cousins, George, Charlotte and Louis and its father, Prince Harry.
The baby will not automatically be a prince or princess, but its great-grandmother, Queen Elizabeth II, can step in to give the baby that title.

What leave Meghan, Harry will take after the baby is born
Kensington Palace has not yet announced maternity and paternity leave the Duke and Duchess of Sussex plan to take after the baby's arrival.
Being a member of the royal family is not a job that comes with established maternity and paternity guidelines. Both Kate and William took some time off after the births of each of their three children.
It will be up to Meghan and Harry to decide the length of time they take off from public engagements.
Meghan has been busily working throughout her pregnancy, recently announcing her four charity patronages.

Who will support Meghan, Harry as new parents
Meghan's mother, Doria Ragland, lives in Los Angeles, but there will be plenty of room for her to stay at Frogmore Cottage should she travel across the pond to help Meghan, her only child.
Closer to home, the couple will of course have Harry's family nearby in London.

Who the baby's playmates may be
Meghan and Harry's child will have built-in playmates with its cousins, Prince George, 4, Princess Charlotte, 3, and Prince Louis, who will turn one in April, all living nearby in Kensington Palace, which is about 30 minutes from Harry and Meghan’s home at Frogmore Cottage.
There will also likely be family holidays all together at Balmoral, the Queen’s estate in Scotland, and those famous royal Christmases at Sandringham House.
Copyright © 2019, ABC Radio. All rights reserved.