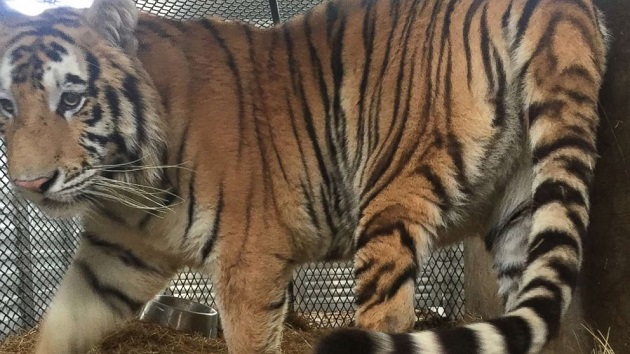 City of Houston(HOUSTON) — A person attempting to smoke marijuana in an abandoned house ended up finding a tiger instead, according to the Houston Police Department.
A woman called the Houston’s city information line on Monday to explain how she found the tiger, Houston Police spokeswoman Kese Smith told ABC News.
Authorities say they spoke with the caller to determine whether the information given was due to the effects of drugs, or if the tiger was real.
Houston Police and a representative from BARC, Houston's animal shelter and enforcement division, were dispatched to the house, and animal control officers could hear and smell a tiger, Lara Cottingham, a spokesperson for BARC told ABC News. After obtaining a warrant, officials entered the property where they found a caged tiger in the garage.
The tiger seemed to be friendly and wasn’t growling, Cottingham told ABC News.
Packages of meat were also found, according to Houston ABC affiliate KTRK-TV.
Animal control tranquilized the animal in order to move it, and a horse trailer was used to transport the animal to the BARC shelter, where it spent the night.
The tiger appeared to be in good health, according to officials, and is scheduled to be assessed further.
While this is not the first instance of a tiger being found in a U.S. urban area, it is fairly rare.
“This is not a pet, this is a wild animal,” Cottingham told ABC.
It is illegal to own a tiger within the Houston city limits, Smith confirmed with ABC.
The tiger was transported Tuesday to a facility in Texas that is able to support such an animal.