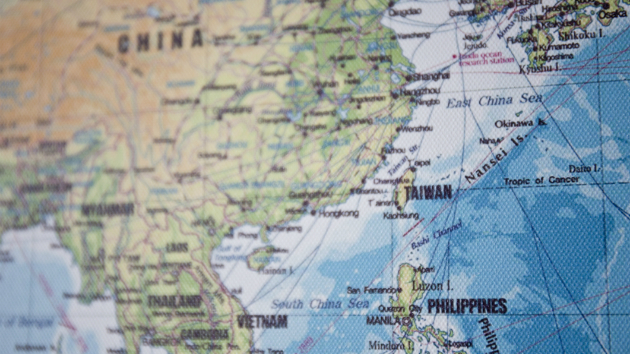 VM_Studio/iStock(WASHINGTON) — Two U.S. Navy destroyers sailed within 12 miles of Chinese-claimed artificial islands in the South China Sea on Monday, and, as expected, the operation drew swift condemnation from China.
A defense official said Monday's transit did not involve any unprofessional or unsafe actions on the part of Chinese military ships in the area. But that was not the case last October, when the destroyer USS Decatur had to take evasive maneuvers to avoid colliding with a Chinese warship that came within 45 yards of its bow.
Why does the U.S. Navy carry out these missions in the South China Sea? And why has China built artificial islands in the South China Sea?
ABC News takes a look at the importance of this little-known but vital waterway.
What's going on in the South China Sea?
The South China Sea makes up the body of water that lies east of Vietnam, west of the Philippines and west of the island of Borneo.
It's a vital waterway with a third of the world's global shipping passing through it every year, much of it going through the strategic Strait of Malacca.
Since China is one of the world's great economies, it sees stability in the South China Sea as key to maintaining economic security.
China is one of five countries in the region staking claim to some of the more than 70 reefs and islets in the South China Sea.
In recent years, China has projected itself militarily into the South China Sea by building up facilities on the Paracel and Spratly island chains.
The Paracels are a group of islands east of Vietnam administered by China that are also claimed by Taiwan and Vietnam.
The Spratly Islands are a collection of several dozen low-lying islands and reefs close to Borneo. In 2014 China began massive dredging operations to build artificial islands around seven reefs that they claimed as their territory.
The artificial islands have been transformed into significant military facilities including three runways that have been used for the deployment of Chinese fighter jets.
China's new military presence and territorial claims are an attempt to project its power into the region and provide stability to the waterway.
But the United States and other countries in the region view things differently, seeing China's territorial claims and military projection as destabilizing and attempts at intimidation.
Despite a 2016 ruling by an international body that China was violating the Law of the Sea Convention with some of its maritime claims, China has continued building up its infrastructure in the South China Sea.
What are Freedom of Navigation Operations?
Every year, the U.S. Navy carries out Freedom of Navigation Operations worldwide to challenge excessive maritime claims. But the FONOPs of China's claims in the South China Sea always draw the most attention.
U.S. officials have said that the FONOPs directed at China are intended to reinforce international frameworks that China has sought to erode by pushing into the South China Sea.
According to International Law, a country's territorial water limits extend 12 nautical miles from its coastline. The same standard applies to territorial airspace.
Both U.S. Navy and Air Force aircraft will sometimes fly above the disputed island groups in the South China Sea to make the point that they are flying through international airspace.
Any country that makes a new claim of air or water sovereignty over internationally recognized waters can experience a FONOP. The Pentagon's annual FONOP report for 2017 includes challenges of maritime claims made by countries as far ranging as Albania and Sri Lanka.
The United States is not the only country carrying out FONOPs in the South China Sea. Last August, the Royal Navy's HMS Albion sailed past the Paracel Islands.
While conducting FONOPs, U.S. Navy ships sail within the 12-mile limit to make the point that the waters are international.
To stress the point even further, some of the operations include "man overboard" drills to demonstrate the Navy's ability to operate in international waters.
China routinely condemns U.S. FONOP operations as violations of its sovereignty.
U.S. Navy ships carrying out FONOPs in the Paracel or Spratly Islands are usually shadowed by Chinese ships. During those operations, they receive constant radio messages from Chinese authorities that they are violating Chinese territory, and, in return, the American ships send back messages, read from a prepared script, that they are transiting through international waters.
Most transits have been uneventful, but last October's FONOP by the USS Decatur off of Gaven Reef in the Spratlys drew international attention.
As with previous transits, the Navy destroyer was shadowed by a Chinese Navy ship that sailed at a good distance on its port side. But then the Decatur's crew had to take evasive maneuvers to avoid a collision when the Chinese vessel came within 45 yards of the ship's bow.
That incident remains the closest call yet between American and Chinese vessels in the South China Sea — a reminder that normal operations can quickly become international incidents.
Copyright © 2019, ABC Radio. All rights reserved.