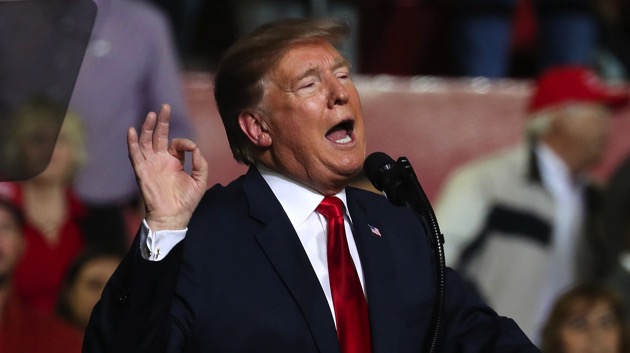 Joe Raedle/Getty Images(EL PASO, Texas) — “If you want a friend in Washington, get a dog,” President Harry Truman is said to have once quipped. President Donald Trump says for now, well, he’s okay without one — a four-legged friend, that is.
At a campaign rally in El Paso, Texas, on Monday night, the president pretty much ruled out joining the tradition of having a first family pet, saying he would feel "a little phony” having a dog.
The mansion at 1600 Pennsylvania Avenue has been home to some famous presidential pooches over the years, including the Obamas' Bo and Sunny, Lyndon Johnson’s Him and Her, and the Bush family's Barney and Mrs. Beasley.
But the Trumps are the first modern first family to not have a pet of any kind.
In his Texas speech, the president pivoted from border security to presidential pooches after praising what he called the "unbelievable” ability of German Shepherds to sniff out drugs. During a recent trip to the southern border, the president learned high-tech machinery sometimes isn’t as accurate as the super-sensitive noses on the highly-trained dogs.
"You do love your dogs, don't you?” he said to the crowd. “I wouldn't mind having one, honestly, but I don't have any time.”
Continuing his riff, he asked: "How would I look walking a dog on the White House lawn? Would that be right?"
Then, he paused to shake his head. "I don't know. Feels a little phony, phony to me. A lot of people say, ‘Oh, you should get a dog,’ ‘Why?’ ‘It’s good politically.’ I said, ‘Look, that’s not the relationship I have with my people.’”
Then a voice from the crowd yelled out “Obama had a dog!”
“Yeah, Obama had a dog, you’re right,” the president said with a laugh.
Trump was likely referring to his daughter-in-law and campaign adviser Lara Trump, a dog rescue advocate. In recent weeks, she's pitched the president on adopting a dog while at the White House, according to a source familiar with the matter.
Lara Trump was recently successful in advocating for the end of greyhound racing in Florida, a state that recently voted to end the sport. She did so along with Trump allies Rep. Matt Gaetz and former Florida Attorney General Pam Bondi.
While the president isn’t fond of having a pet himself – his first wife Ivana recounted in a memoir that Trump didn’t want her poodle “Chappy” to move in with their family in New York – he has welcomed Westminster dog show champs to Trump Tower and raised money for charities that train service dogs.
Still, when he speaks about dogs these days, it's usually as an insult. Trump’s political enemies have “choked like a dog,” “barked like a dog,” “sweated like a dog,” “lied like a dog,” have been “dumped like a dog” or was “fired like a dog.” Even actress Kristen Stewart “cheated like a dog,” according to Trump.
The president’s aversion to getting himself a four-legged companion goes against the American norm, though. According to the American Veterinary Medical Association, 68 percent of all Americans own a pet, and 60.2 million Americans — or 48.5 percent — own more than one.
Copyright © 2019, ABC Radio. All rights reserved.