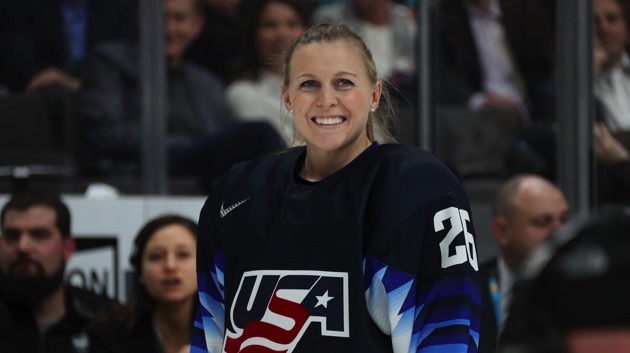 Dave Sandford/NHLI via Getty Images(NEW YORK) — After a young Canadian girl saw professional hockey star Kendall Coyne Schofield stun in the NHL skills competition, it inspired her to do a little on-ice drill of her own.

. @KendallCoyne ever since your awesome showing at the @nhl skills competition, my 4yo daughter Demie wants to be just like you! ❤️ Here’s her attempt to break your record! 🏆🏒Thanks for inspiring little girls everywhere! #skatelikeagirl #hockey #girlscandoanything pic.twitter.com/TRcgbpabIv

The Olympic gold medalist saw a video of 4-year-old Demie Latham attempt to break Coyne Schofield's skating time and thought it was "amazing."
The Team USA star recently made history as the first woman to compete in the NHL All-Star Skills Competition on Jan. 26 and skated around the entire perimeter of the ice in 14.3 seconds.

History was made and barriers were broke. It was such an honor to be the first woman to compete in the @nhl All Star Skills Competition last night. I can’t wait to see what the future holds! #NHLAllStar pic.twitter.com/Sc125oBGCx

A video showed the young skater taking off on a frozen pond turned makeshift hockey rink, circling past the first small net followed by the second, and returns to her starting point "without falling," she exclaimed in the video.
Demie's mom, Catherine Lathem, posted the video accompanied with the hashtags "skate like a girl," "hockey" and "girls can do anything."
The video quickly garnered over 100,000 views, including by Coyne Schofield herself.
"Amazing! You can’t be what you can’t see…Keep up the great work Demie" she said on Twitter.

Lathem told ABC News she thinks her daughter was "a little overwhelmed by all the attention" and hailed the hockey star for her response.
"It was very kind of Kendall to reach out and respond. She is an absolute class act and a role model," Lathem said.
The young girl's mom also applauded the NHL for the impact its inclusion of women has had on young girls.
"I praise the NHL for showcasing women, it’s very clear to see what kind of impact it has had on girls, and on our daughter," she said. "Demie hopes to start playing hockey next year."
Copyright © 2019, ABC Radio. All rights reserved.