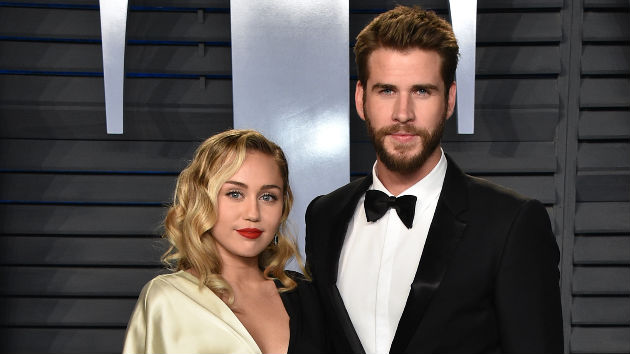 Photo by John Shearer/Getty Images(LOS ANGELES) — People magazine reported kidney stones were what sidelined star Liam Hemsworth for the premiere of his latest film Isn't It Romantic on Monday night.

However, he found an A-list substitute to walk the pink carpet in Los Angeles: his wife Miley Cyrus.
The couple, who were married in December 2018, posted messages of appreciation for one another on social media. "Sorry I couldn't make it to the @isntitromantic premier tonight guys," Hemsworth posted. "Been dealing with some pretty annoying health stuff the last couple days…Lucky I have the best girl in the world to represent for me!" he continued.

"Thanks for the support babe! I hope everyone enjoys the movie! It’s a perfect Valentine’s Day flick so if ya ain’t got nothin better to do then go see it! Love to all!"
Cyrus also shared several snaps of her red carpet look, a glamorous red Valentino gown, commending her husband for his work on the film in the caption of her post.
"So proud of my hunky hubby @liamhemsworth & his newest movie #IsntItRomantic," she wrote. "He…he is recovering and taking this time to rest / heal."
She explained that actors and actress often want to put their health aside for their work.
"It’s hard for entertainers to put themselves before the project but this time it was crucial," she wrote. "I am proud to represent him and his incredible work. So happy to see him shining in this comedy!"
"He is the funniest person I know, and the world now gets to see the Liam I wake up to every day…. luckiest," she added.
In another snap, she posed in front of Hemsworth's movie poster in which he's playing a sax. "Getting sick blows," she wrote. "Get well soon babe. I love you."