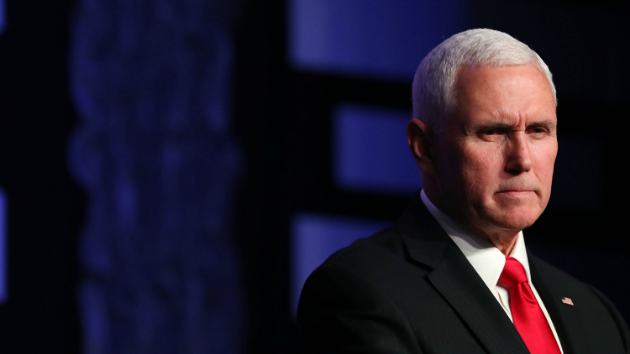 Joe Raedle/Getty Images(WASHINGTON) — Vice President Mike Pence is expected to send a strong message to Iran and discuss the rising tension in Venezuela as he travels to Europe this week for two conferences focused on the Middle East and international relations.
At a conference hosted by the U.S. and Poland in Warsaw, which seeks to address instability in the region, Pence will give the keynote remarks. His speech at the Ministerial to Promote a Future of Peace and Security in the Middle East is expected to send a strong message to Iran, according to a senior White House official.
The administration has drawn a hard line with Iran. Despite concerns from other world leaders, President Donald Trump withdrew the U.S. from Iran's landmark 2015 nuclear accord with world powers and restored economic sanctions. And, in a recent interview with CBS News' Face the Nation, Trump said the U.S. has an "incredible base" in Iraq that he intends to keep "because I want to be able to watch Iran."
Ahead of Pence's trip, the president tweeted on Monday that "the long-suffering Iranian people deserve a much brighter future," referencing the 40th anniversary of the country's Islamic revolution.
Pence also will stop in Germany for the Munich Security Conference and is expected to address the ongoing tension in Venezuela.
Earlier this month, Pence held a roundtable discussion with exiles from Venezuela in South Florida, vowing to stand with them "until the suffering is over and freedom is restored" and reinforcing the White House's support for opposition leader Juan Guaidó.
As he makes a public call for international peace, Pence also will hold private meetings with Polish President Andrzej Duda, Polish Prime Minister Mateusz Morawiecki, Israeli Prime Minister Benjamin Netanyahu, Afghanistan President Ashraf Ghani and Ukrainian President Petro Poroshenko.
The vice president will "reaffirm the Administration's commitment to international peace and stability, recognizing the value of strategic partnerships in the Middle East, as well as our shared global security responsibilities," Alyssa Farah, Pence's press secretary, said in a statement.
Trump's senior adviser and son-in-law Jared Kushner, who met with Netanyahu in 2017, will be traveling with Pence.
During the trip, Pence also will participate in a U.S.-Poland engagement at Warsaw Chopin Airport and speak to U.S. and Polish troops stationed around the region. While in Poland, he will tour Auschwitz-Birkenau, a former concentration camp operated by Nazi Germany during World War II.
Copyright © 2019, ABC Radio. All rights reserved.