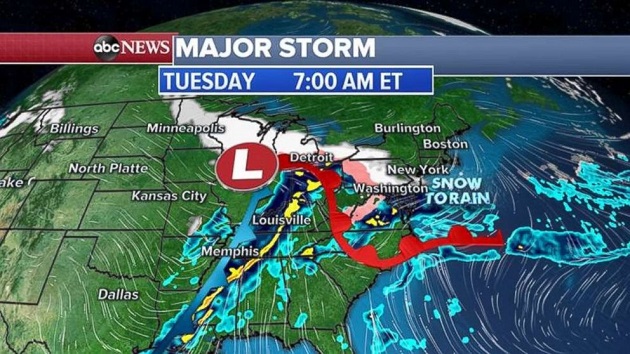 ABC News(NEW YORK) — A major winter storm is barreling through the Northeast Tuesday, bringing dangerous snow, ice and rain to the evening rush hour commute.
New York City was coated in snow Tuesday morning and the snow has since changed to sleet and freezing rain. Most areas saw .5 to 2 inches of snow or sleet with a glaze of ice.
New York City's evening rush hour will be messy as the sleet and freezing rain warms up to rain.
Drivers should be prepared for "a slow slog," said New Jersey Gov. Phil Murphy, who declared a state of emergency.
"We continue to urge everybody to please take it slow and proceed with caution," Murphy told reporters Tuesday.
New York City Mayor Bill de Blasio added, "The evening rush hour will be very slippery. It's going to be slower and more difficult than usual."
"If you have the option to not drive back but use mass transit, please do," the mayor said.
In Hartford, Connecticut, the snow will be transitioning to ice during the evening commute. While in Boston, snowfall may be especially heavy at that time.
Public schools in Worcester, Massachusetts, are among those closed for the day.
Three to 5 inches of snow and sleet will be possible in southern New England when the storm ends.
The snow will eventually change to rain for all the Northeast coastal cities overnight, but inland, it's a different story. In Pennsylvania, New York state and New England, some areas may see up to 1 foot of snow.
The storm also stretches as far west as Minnesota, bringing heavy snow to Minneapolis and Green Bay.
Up to 1 foot of snow is possible, as well as ice from Chicago to Detroit.
The storm in the Northeast and Midwest moves out on Wednesday.
Meanwhile, on the West Coast, Seattle is buried under record-breaking snow after it was hit on Monday with its fourth snowstorm in one week.
With more than 20 inches from the storms, the city is experiencing its snowiest February on record and snowiest overall month in 50 years.
That storm is now headed for California, which should see significant rainfall in San Francisco and Los Angeles on Wednesday.
Mudslides and flash flooding are possible.
The heaviest rainfall will be in Northern California, where residents could see more than 4 inches of rain.