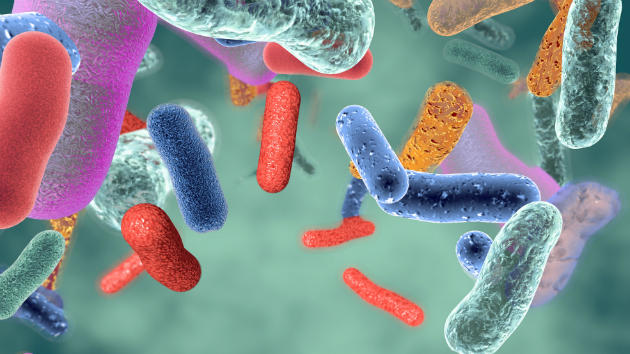 image_jungle/iStock(NEW YORK) — Have you ever felt “butterflies in your stomach,” or made a “gut decision”?
That might have been your “second brain” — otherwise known as your gut — talking. Our guts are composed of over 100 trillion bacteria and about 100 million nerve cells line the entire gastrointestinal tract. The gut and brain are often communicating with each other along what’s known as the gut-brain axis.
Both mental and physical health — from Alzheimer’s disease to depression — can be affected by the health of our guts. Recent scientific research has shown the numerous ways our guts work and heal.
Our gut bacteria produce many of the chemicals that affect our mood

People usually assume that most of our serotonin, often known as the happy chemical, is housed in our brain. However, approximately 95 percent of our body’s serotonin is actually found within the gut. GABA, another neurotransmitter that improves mood, is also often present in the gut. And both are released from good bacteria, meaning that the gut has a tremendous effect on our overall health.
A large part of our immune system is also housed in the gut and it's connected to the brain via the vagus nerve, which, in addition to the digestive tract, also has crucial functions in many other parts of the body. The vagus nerve acts like a highway of information between the gut and the brain, transporting inflammatory markers back and forth.
Inflammation, the body’s defense mechanism against injury or foreign invaders, is usually a healthy response. However, chronic inflammation — lasting months or even years — can slowly and subtly cause damage. It has been linked to countless chronic diseases and mental illnesses, including anxiety and depression.
Heightened inflammation alerts the central nervous system (CNS) to induce symptoms resembling depression, such as lethargy, sleep disturbances and changes in appetite. The two-way link between inflammation and depression promotes the idea that reducing inflammation through a healthier, balanced diet and by regulating stress can be beneficial to our entire health.
Chronic inflammation can be caused by autoimmune disorders and infection, but there are also unexpected causes, such as long-term exposure to pollutants, harmful industrial chemicals, unhealthy diets and chronic stress.

Bad gut bacteria have been linked to neurologic and chronic diseases
Various studies have catalogued the association between imbalanced gut microbiota — usually marked by bad bacteria — and neuroimmune and neuroinflammatory diseases, such as Alzheimer’s, multiple sclerosis and Parkinson’s disease. Gut imbalances may also contribute to other types of critical diseases, including obesity and colorectal cancer.
More research is needed to understand if these links are happenstance or if they’re actually caused by bad gut bacteria. But restoring the gut’s bacterial balance may be a crucial factor in the future for preventing and treating these types of diseases and chronic illnesses.
It's possible to cultivate a healthy gut
The good news is that there are many ways to reverse inflammatory responses that stem from an unhealthy gut. Our gut microbiota is extremely responsive to outside factors, such as diet, smoking, antibiotic use, infections and stress.
Some basics steps everyone can take to directly combat inflammation include:
• Avoiding diets that are high in saturated fats and sugars. Anti-inflammatory foods include foods with healthy fats, such as walnuts, flaxseed and oily fish like salmon or sardines; fruits and vegetables and whole grains.

• Practicing well-being. Try mindfulness or meditation or just figure out a way to reduce stress that works for you, and commit to it.

• Get physically active. Beyond the tangible benefits of improving our heart health and helping with weight control, exercise has been proven to enrich the diversity of our gut bacteria and reduce inflammation. As little as 20 minutes a day can produce anti-inflammatory benefits.
Copyright © 2019, ABC Radio. All rights reserved.