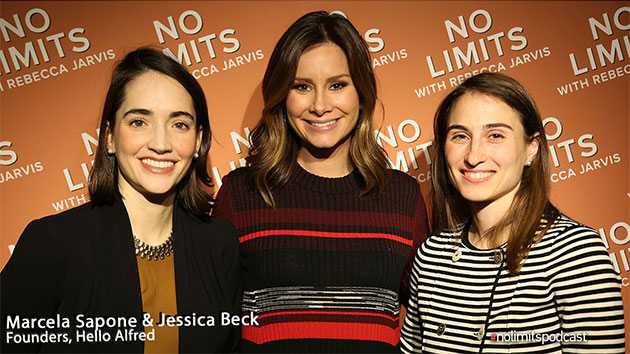 ABC News(NEW YORK) — Marcela Sapone attended Harvard Business School with two goals in mind, to find a co-founder and a “really good idea to work on.”
Sapone met Jessica Beck on the second day of classes and while Beck admits to wanting to explore different areas of the industry before settling down and creating something on her own, she was easily convinced by Sapone to jump into the startup world.
“I thought I was going to start a business, but I thought it was going to be later, so I was looking to explore different areas and different ideas, but I was easily convinced,” Beck told ABC News’ Chief Business, Technology and Economics correspondent, Rebecca Jarvis on an episode of the “No Limits with Rebecca Jarvis” podcast.
Once Beck was on board, it was time for the two to come up with an idea, so when Beck drew a stick figure running around a building taking care of groceries, dry cleaning, etc, Sapone said she thought it was “the worst idea of all time.”
“It just sounded very hard, very complicated, and like a pie in the sky idea, the idea of everybody having someone they could rely on for help,” Sapone said.
After much thinking and planning and trying to sculpt the original stick figure drawing into a real life business, Beck and Sapone created Hello Alfred, a residential hospitality and commerce platform for modern urban living, to see if there was a real need for this service. To spread the word and figure out if this could be a successful business, the two co-founders slid postcards under people’s doors in different neighborhoods throughout Boston.
“We had families sign up for $400 a month, and Jess and I knocked on their door and said we will be your assistant, tell us what we can do to take things off your plate and save you time,” Sapone said.
From picking up packages and dry cleaning, to buying and putting away groceries, the business began to grow, leaving Sapone and Beck overwhelmed as they were still in school. They had to get customers to trust them with a key to their home, while finishing assignments, studying for tests and exhausting themselves running errands. They tried to cancel the business several times, but their customers were already hooked.
“We reached out to our customers and said, ‘I'm sorry but we are going to have to shut down the business to focus on business school.’ Everyone wrote back and said we will pay you more,” Sapone said.
The duo decided to listen to their customers and continue with their business, seeking out investors who would support their mission to provide employees with hourly pay and benefits, which many investors didn’t agree to.
“That helped us really eliminate a lot of folks who didn't understand that this is a human-centric business and that technology companies in today's era need to be human-centered,” Sapone said.
Beck and Sapone ultimately chose Bijan Sabet with Spark Capital to help fund their expanding one-of-a-kind business. Sabet was the first investor in Twitter and Tumblr.
Almost five years later, Hello Alfred has expanded into eight major U.S. cities, and is available to over 100,000 residential units. Amazon has rolled out a similar service and Wal-Mart has been looking into a similar concept.
“For us, people are an asset and it means you have to invest in people, set them up to be successful, give them the tools they need,” Beck said as to why Hello Alfred continues to be successful.
If you’re wondering where the name Alfred came from, think Batman and his trusty sidekick.
“Batman is my favorite superhero because he's the only superhero who at the end of the day is just like us, but through the help and organization of technology and his sidekick Alfred he becomes a superhero,” Sapone said. “And the idea is we want to do that for our members.”

Hear more from Hello Alfred co-founders Marcela Sapone and Jessica Beck on episode #123 of “No Limits with Rebecca Jarvis.”