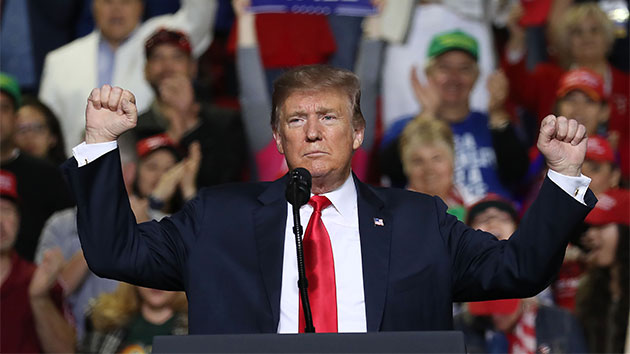 Joe Raedle/Getty Images(WASHINGTON) — The White House on Tuesday condemned violence against the press after the BBC said a man wearing a Make America Great Again hat attacked on of their cameraman at a rally for President Donald Trump Monday night in El Paso, Texas.
In an incident caught on video, the man appeared to shove the cameraman, Ron Skeans, before being restrained by Trump campaign security.
Trump, standing in front of the press pen, paused his speech during the scuffle and checked to see if the cameraman was alright.
"You all right? Everything okay?" Trump asked before continuing with his speech. In the background, people in the crowd could be heard yelling “CNN Sucks!”
The man who allegedly attacked Skeans has not yet been identified.
The BBC said in a statement that Skeans was "violently pushed and shoved" by someone in the campaign rally crowd, and Skeans is doing okay.
"It is clearly unacceptable for any of our staff to be attacked for doing their job," the BBC stated.
The BBC added that they have asked the Trump campaign for additional security at Trump rallies, and said that the security guards present did nothing to stop the Trump supporter.
Michael Glassner, the COO of Trump for President, Inc., said in a statement to ABC News: "An individual involved in a physical altercation with a news cameraman was removed from last night's rally. We appreciate swift action from venue officers and law enforcement officers."
White House press secretary Sarah Sanders said in a statement that the president condemns all acts of violence against anyone – even the press.
"President Trump condemns all acts of violence against any individual or group of people – including members of the press. We ask that anyone attending an event do so in a peaceful and respectful manner," Sanders said.
In the wake of violent attacks on journalists, the president has been asked if his rhetoric bears responsibility. The president has stood firm that while he does not condone attacks, he does not take responsibility for recent violence against the press.
"I do notice that people are declaring more and more fake news, where they go, 'Fake news!'" the president said during an interview with The New York Times earlier this month. "I even see it in other countries. I don’t necessarily attribute that to me. I think I can attribute the term to me. I think I was the one that started using it, I would say."
Copyright © 2019, ABC Radio. All rights reserved.