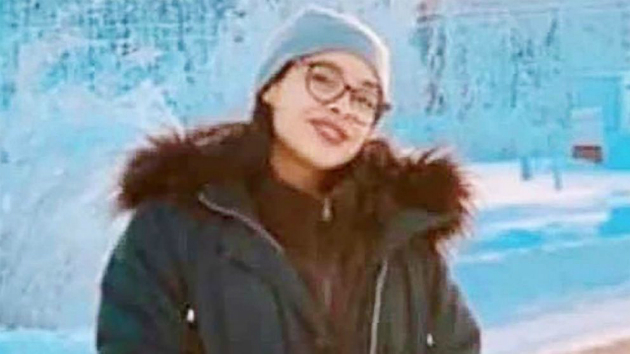 Released by Greenwich Police Dept.(GREENWICH, Conn.) — An ex-boyfriend has been arrested in connection to the death of 24-year-old Valerie Reyes, whose body was discovered bound in a suitcase on the side of the road, police said Tuesday.
Javier de Silva, 24, was arrested Monday night in Queens, New York, according to New Rochelle, New York, Police.
The suspect also allegedly fraudulently used Reyes' ATM card, Greenwich Police Capt. Robert Berry said Tuesday.
Reyes, of New Rochelle, was found dead on Feb. 5 inside a suitcase along a Greenwich, Connecticut, road with her hands and feet bound, authorities said.
Autopsy results are pending, Berry said.
Reyes was last seen on Jan. 29 and was later reported missing to the New Rochelle Police, according to police.
Greenwich sits along the New York-Connecticut state border. New Rochelle is about 12 miles south of Greenwich.
Reyes' mother, Norma Sanchez, told told ABC New York station WABC-TV last week that her daughter had broken up with her boyfriend days before she disappeared. Police did not confirm that this was the same ex-boyfriend.
In their last conversation with each other, Sanchez said that Reyes told her she had feared for her life and that she thought someone was going to murder her, she told WABC. When Sanchez asked Reyes if someone had threatened her — and asked about her ex — Reyes said "no," Sanchez told WABC.
"Multiple crime scenes had been examined, hundreds of hours of surveillance footage had been reviewed, and numerous interviews of potential witnesses had been conducted," Berry said.
Social media footprints were also analyzed, Berry said.
Greenwich police ask anyone with information about Reyes or her disappearance to call the Greenwich Police Tip Line at (203) 622-3333 or email at [email protected]
Copyright © 2019, ABC Radio. All rights reserved.