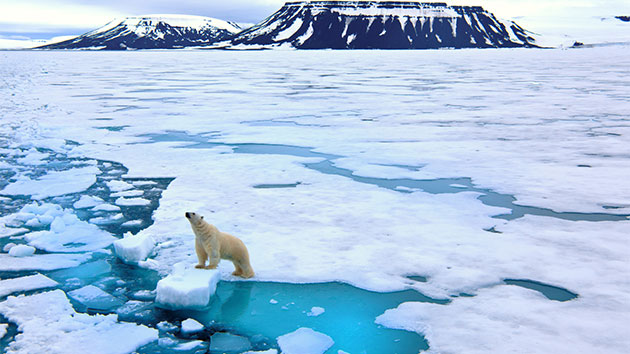 A team of specialists is being flown into Novaya Zemlya, an archipelago with a population of less than 3,000 people, to assist in removing the bears, which have been gathering in populated areas in increasingly large numbers since December, according to local authorities.

Fifty-two bears have been spotted close to the archipelago’s main population center, Belushya Guba, with six to 10 of them constantly inside the village, Alexander Minaev, the deputy head of the local municipal administration told Russian state news agency, TASS. Videos have appeared of dozens of the animals rooting through a nearby garbage dump and CCTV footage shown on Russia state television revealed a bear wandering through the hallway of a building.

“I have been on Novaya Zemlya since 1983, but there has never been such an invasion of polar bears before,” Zhiganshi Musin, the head of Novaya Zemlya’s administration told TASS. “They are literally chasing people and going into the entranceways of housing buildings.”

The local administration declared a state of emergency on Saturday, warning that the bears were behaving aggressively and that people were afraid to leave their homes.

Russian state media reported that the usual methods of scaring the bears away using police sirens, car horns and dogs are no longer effective, because the animals have become so used to them. Authorities have sent out anti-bear patrols, and now special barriers have been erected around schools, and special transport has been arranged for children and workers, to help them get around town without encountering the bears.

Wildlife experts have warned the polar bears’ incursion is the result of shrinking sea-ice, as rising Arctic temperatures due to global warming cause the ice to melt, reducing the bears' normal hunting grounds. Unable to hunt on the ice as usual, the bears are forced to venture inland to human settlements in search of food.

“Everyone understood that this could happen,” Mikhail Stishov, the World Wildlife Fund (WWF)’s project coordinator on Arctic biodiversity told Russian state news agency RIA Novosti. “Now the bears are increasingly on the shores on account of the absence of ice for long periods. They come onto shore, where they get used to human housing, especially if the system of garbage disposal isn’t very well set up.”

Russia classifies polar bears as an endangered species and shooting them is illegal.

The specialists being flown in hope to remove the bears without resorting to guns, TASS reported, but environmental officials have warned that it may be necessary if all other efforts fail.