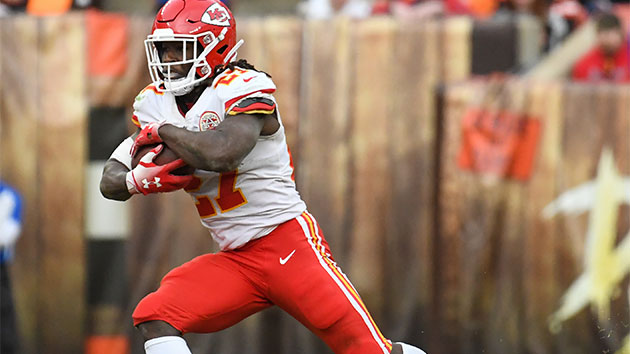 Nick Cammett/Diamond Images/Getty Images(CLEVELAND) — Kareem Hunt is back in the National Football League a little more than two months after he was caught on video beating and kicking a 19-year-old woman.

The Cleveland Browns signed the 23-year-old running back on Monday, 74 days after he was cut by the Kansas City Chiefs in the wake of the violent encounter at his apartment building in Cleveland.

While Hunt is technically back in the NFL, he will be placed on league Commissioner Roger Goodell's exempt list, meaning he is not allowed to play or attend any NFL games until the NFL makes a final decision on discipline.

John Dorsey, general manager of the Cleveland Browns, said the team "did extensive due diligence" to understand "whether it was prudent to sign" Hunt, including speaking with clinical professionals.

Dorsey is the former general manager of the Chiefs, who drafted Hunt in 2017 out of the University of Toledo. Hunt went on to lead the NFL in rushing in his rookie season with Kansas City.

"My relationship and interaction with Kareem since 2016 in college was an important part of this decision-making process…," Dorsey said in a statement.

"There were two important factors: one is that Kareem took full responsibility for his egregious actions and showed true remorse and secondly, just as importantly, he is undergoing and is committed to necessary professional treatment and a plan that has been clearly laid out," Dorsey said.

On Feb. 10, 2018, police were called to Hunt's apartment building in Cleveland to investigate a report of an assault on 19-year-old Abigail Ottinger, a student at Kent State University, according to police records obtained by ABC News.

The website TMZ posted the video on Nov. 30 of the violent confrontation between Hunt and Ottinger.

The footage showed Hunt pushing Ottinger as a man attempted to get between them and separate them.

After getting pushed, Ottinger came back at Hunt and appeared to punch him in the face before several men hustled Hunt into a hallway and out of view of the camera. The video, which has no sound, shows Ottinger follow Hunt into the hallway and say something to the player, who breaks free and pushes a man into Ottinger, sending them both to the ground and her face-first into a wall.

As several people, including another woman, appeared to grab Hunt to keep him away from Ottinger, Hunt is seen kicking her as she squats on the floor, knocking her to the ground again.

Hunt was not arrested nor charged in the incident.

The Chiefs cut Hunt after TMZ posted the video. Team officials claimed that Hunt was not truthful with them about what occurred.

"First off, I would like to once again apologize for my actions last year," Hunt said in a statement released Monday. "What I did was wrong and inexcusable. That is not the man I was raised to be, and I've learned a great deal from that experience and certainly should have been more truthful about it after the fact.

He said he is "extremely grateful that John Dorsey" and the Cleveland Browns are giving him a second chance.

"I am committed to following the necessary steps to learn and to be a better and healthier person from this situation," Hunt said. "I also understand the expectations that the Browns have clearly laid out and that I have to earn my way back to the NFL. I'm a work in progress as a person, but I'm committed to taking advantage of the support systems that I have in place to become the best and healthier version of myself."

Shortly after he was released by the Chiefs, Hunt said in an interview with ESPN that he accepted full responsibility for the incident. He also said he had never met Ottinger until she showed up at his apartment the night of the assault with friends he had invited to his residence.

"I'm asking for forgiveness and I definitely believe I deserve forgiveness," Hunt said. "Everything is really happening fast right now and I just want everybody to forgive me. I know it's going to be hard. I made a bad choice and I'm not going to let this bring me down."