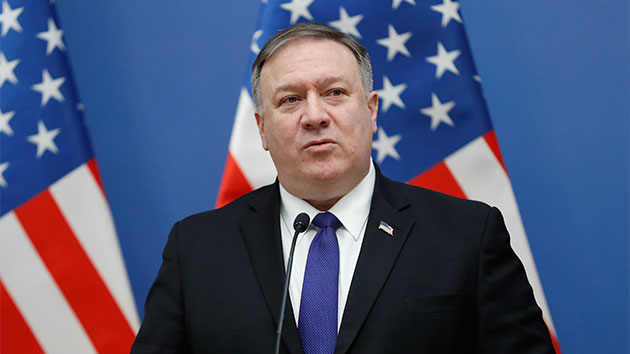 Laszlo Balogh/Getty images(WASHINGTON) — Secretary of State Mike Pompeo pushed back against bipartisan chorus of critics on Capitol Hill who have accused the Trump administration of protecting Saudi Crown Prince Mohammed bin Salman for his alleged role in the murder of Washington Post columnist Jamal Khashoggi.

"America is not covering up for a murder," Pompeo told reporters in Budapest, Hungary on Monday.

That charge, from lawmakers like Sen. Tim Kaine, D-Va., came after the Trump administration missed the deadline for an investigation that Congress triggered in October into the crown prince's role. Kaine, who represents Virginia, where Khashoggi was living when he was murdered in the Saudi consulate in Istanbul, Turkey, said the administration was "aiding in the cover up of a murder."

He continued, "America's taken more action in response to the tragic murder of Jamal Khashoggi and will continue to take more action. The president's been very clear — couldn't have been more clear: As we get additional information, we'll continue to hold all those responsible accountable."

While Pompeo said the U.S. would await "additional information," Republicans and Democrats in Congress say the evidence already shows that the prince, sometimes known by his initials "MBS," ordered the murder.

To date, the administration has sanctioned 17 Saudi officials and issued visa bans or revocations for them and four others, all of whom have been implicated by the Saudi government itself. The kingdom says that the murder plot was a rogue operation ordered by the deputy intelligence chief and with no knowledge of the crown prince.

"We know that the crown prince did not order this. We know that this was a rogue operation," Saudi Minister of State for Foreign Affairs Adel al Jubeir said Friday, adding, "These things happen. Mistakes happen."

A senior State Department official told reporters last month that the Saudi investigation and legal process had "not yet hit that threshold of credibility and accountability." But keeping sanctions limited to the same Saudi officials who have been implicated by their government has appeared to be an endorsement of the kingdom's narrative.

President Donald Trump issued a statement in November that said MBS's role may never be known, and Pompeo and other top administration officials have said there is no "direct evidence" or "smoking gun" implicating the crown prince, who is next in line and considered the real power behind his father King Salman's throne.

In October, Sens. Bob Corker and Bob Menendez, the top Republican and Democrat on the Senate Foreign Relations Committee, ordered the Trump administration to investigate who was responsible for Khashoggi's death and provide a report to Congress in 120 days. They triggered the investigation under the Global Magnitsky Act, which allows the White House to sanction foreign leaders for human rights abuses or corruption.

One month later, after those 17 Saudi officials were sanctioned, they followed up with a second letter, demanding an investigation specifically into Prince Mohammed's role and requiring an answer within the original 120-day deadline.

When that deadline came last Friday, Pompeo instead provided a letter to Congressional leaders that said the same as the administration has for months — they have taken action and will do so if more information comes to light.

"We will continue to use relevant authorities as appropriate to promote accountability for the murder of Mr. Khashoggi and impose tangible and significant consequences on those responsible," Pompeo wrote in one letter, obtained by ABC News.

But he makes no mention of the crown prince, infuriating members of Congress — even top Republicans.

"I am deeply troubled by the letter I received from the administration regarding the brutal murder of Washington Post columnist Jamal Khashoggi," said Rep. Michael McCaul, R-Texas, the top Republican on the House Foreign Affairs Committee. "I call on the administration to immediately comply with the requirements of the law, and to provide Congress with the information required."

The administration argues, however, that the law gives the executive branch discretion, pointing to the statement then-President Barack Obama issued when he signed the Global Magnitsky Act into law.

"Consistent with the constitutional separation of powers, which limit the Congress's ability to dictate how the executive branch executes the law, I will maintain my discretion to decline to act on such requests when appropriate," Obama said at the time.

That's something that Senate Democrats say they disagree with.

"The president has no discretion here. He's either complying with the law or breaking it," said Senate Foreign Relations Committee Democrats communications director Juan Pachon.