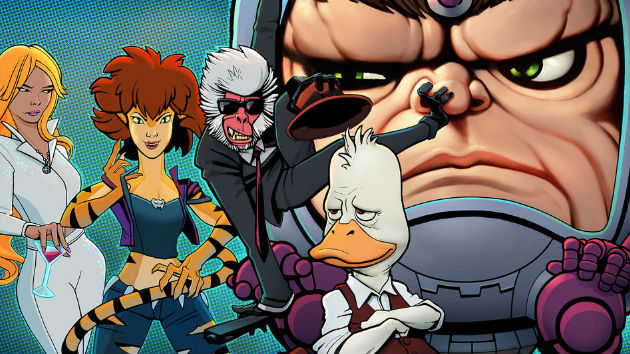 Marvel(LOS ANGELES) — Marvel Television is bringing four of Marvel Comics' off-kilter characters to Hulu, in a quartet of animated shows targeted towards adults.

Variety reports Howard The Duck, Hit-Monkey, M.O.D.O.K., and Tigra and Dazzler will be coming to the streaming service, each featuring with some very unique comedic voices.

Kevin Smith is co-writing and co-producing Howard The Duck, about a talking alien duck. Howard, the subject of a famously bad 1986 live-action movie, was briefly glimpsed in Guardians of the Galaxy. Helping Smith is Dave Willis, known for the offbeat Adult Swim cartoons Aqua Teen Hunger Force and Squidbillies.

Hit Monkey is about an assassin monkey, and Blades of Glory writers Josh Gordon and Will Speck are behind that one. Guardians of the Galaxy writer-director James Gunn once pitched Marvel Studios on the idea of making a film based on the character.

M.O.D.O.K. will center on the work/life balance of the giant-headed villain whose name means "Mental Organism Designed Only for Killing." Comedian and certified geek Patton Oswalt is co-writing and producing the project.

Marvel TV head Jeph Loeb said of the shows: "A giant head. A monkey. A tiger lady and a disco queen. And the duck. Brought together because no one else could but Marvel Television on Hulu. M.O.D.O.K., Hit Monkey, Tigra & Dazzler and Howard the Duck will form a team no one asked for — The Offenders (and wait until you see who the Team Leader is!)!" He adds, "We have such tremendous talent bringing amazing adult animation that's fun, fresh and fantastic. We're so excited for what's to come!"