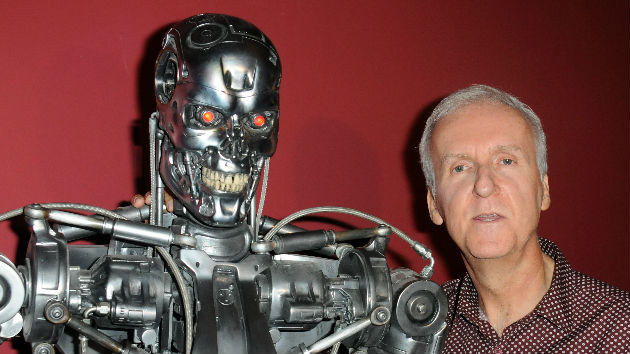 Photo by Albert L. Ortega/WireImage(LOS ANGELES) — In a chat with Yahoo! Entertainment about his new release Alita: Battle Angel — which he co-wrote and produced — James Cameron says the working title of the new Terminator movie is Terminator: Dark Fate.

Cameron explains that, like Alita, he guided the process, but because he's busy with more Avatar films, he left the directing up to somebody else. While Robert Rodriguez called the shots on Alita, Deadpool veteran Tim Miller was behind the camera for this new Terminator film.

The new movie deliberately ignores the events of Terminator 3: Rise of the Machines, Terminator: Salvation, and, perhaps most gratifyingly for fans, the critically savaged Terminator: Genisys.

Cameron said, "I can’t be involved in this film at all if Arnold [Schwarzenegger] is not in it," and added that he "strongly recommended" the filmmakers bring back Linda Hamilton as Sarah Connor — something Miller was keen to do.

If you remember, Sarah gives birth to John Connor, the future savior of mankind in the war against the machines.

What she's been through has, "hardened her even more, but in a way that made her much stronger…Maybe less likable, but stronger," Cameron notes. He addis, "Ultimately, she becomes a really important character in passing the baton to the new characters that come in. It’s a very female-centric film, which I'm glad Tim embraced.."