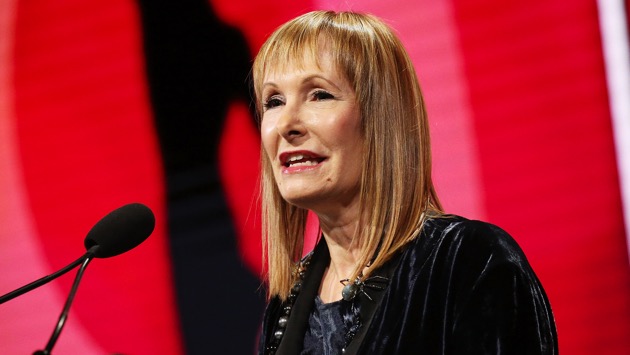 Michael Tran/Getty Images(BERLIN) — As a young, female movie producer working in Hollywood in the 1980s, Gale Anne Hurd struggled for her talents to be recognized by her male peers.
Although she'd already produced and co-wrote her first feature film, The Terminator, which was a blockbuster hit, some potential employers accused her of receiving credit for work she hadn't done.
"I was asked at one point, how can a little girl like you produce a big movie like this?" she recalled, speaking at a Berlin Film Festival event on Friday.
Now a bonafide hotshot in the business, having produced Aliens, The Walking Dead and receiving a star on the Hollywood walk of Fame, Hurd is a role model for women struggling to make it in the male-dominated industry that many believe is becoming more progressive as the #MeToo movement gains momentum.
"There is still a sense that there are things 'women can’t do,'" she told the audience. "There are socio-cultural biases that people aren't even aware of, and that's something we can all work proactively to change.”
Representing Women in Film L.A., Hurd was in Berlin to celebrate the launch of the new Alliance of Women's Networks, as well as the financial initiative 10% for 50/50 — a program that offers discounts for productions on which an equal number of men and women work. Such initiatives are aimed at promoting a greater inclusion of women in the industry. Only 4 percent of the 100 top-grossing films of 2018 were directed by women, according to the Center for The Study of Women in Television and Film.
The Berlin Film festival, now in its 69th year, also is stepping up to gender equality. In an event organized by Women in Film and Television on Friday, Berlin Film Festival director Dieter Kosslick signed a pledge for gender parity, promising that the festival work toward having an equal gender ratio in various areas of the festival's leadership and publishing gender statistics on films submitted to the festival. The pledge was launched in Cannes in 2018 by French organization 5050×2020 and has already been signed onto by a number of other international festivals in Venice and Sarajevo.
However, the Berlin Film Festival is already ahead of the curve when it comes to promoting women in leadership roles. According to the festival's annual gender survey, 63 percent of the leadership positions in the festival's 15 sections are women.
"During the two last decades the female representation has completely changed at Berlinale and I am happy it has gone up," Kosslick told ABC in a statement.
In this year's main competition category, seven out of 17 films were from female filmmakers, compared to three by women at Cannes last year and just one in Venice.
Next year, Berlinale will change leadership, and its new head is tipped to be Mariette Rissenbeek, who would be the first woman to lead a major film festival.
"What's changed is that we have changed," said Kissy Dugan, Italy's representative for the new Alliance of Women's Networks. "We have gotten together, crossed cultures and borders and boundaries to take responsibility for gender parity."
With more women producing, directing and writing, Hurd said she feels there's momentum sweeping the industry.
"The point is that it's not a wave you let carry you forward and recede back into the ocean," she said. "We need to keep pushing to take back this initial progress and make it something that's not just a temporary solution to a temporary problem and make it the face of the industry."
Copyright © 2019, ABC Radio. All rights reserved.

Joe and Anthony Russo on casting Tom Holland in ‘Cherry’, and their new film vs. directing a Marvel movie
Milli Vanilli biopic dropped by film company, controversial director Brett Ratner may be the reason why
#MeToo, Time’s Up and National Women’s Law Center launch campaign for Black survivors of sexual violence
Report: J.J. Watt has received offers from multiple teams
What women need to know about fertility and COVID-19 vaccines
Martha Stewart has mixed feeling feelings about #MeToo