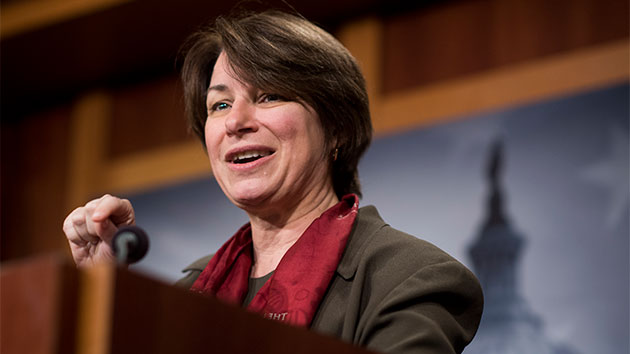 "I stand before you as the granddaughter of an iron ore miner, the daughter of a teacher and a newspaperman, the first woman elected to the United States Senate from the state of Minnesota, to announce my candidacy for president of the United States," she told a large crowd as it snowed heavily.

With temperatures hovering just around 16 degrees and snow blanketing the grass of the venue at Boom Island Park in Minneapolis, supporters waved signs and American flags. One supporter prepared a sign with the words: "From whiteout to White House."

The senator spoke to a crowd of 9,000 people on what many considered a 'beautiful' day despite the snowy conditions, according to campaign aides.

She also described her campaign as "homegrown."

"I don’t have a political machine. I don’t come from money. But what I do have is this: I have grit."

Perhaps in an attempt to follow in President Barack Obama's footsteps or just an unintentional coincidence, Klobuchar announced her candidacy on Feb. 10 — the same date Obama announced his bid for the White House in 2008, 12 years ago.

Two hours ahead of the event, staff began hanging blue signs with “Amy for America” printed in large white letters. A large American flag decorated the stage, its colors standing out amongst the white blizzard fog hiding the city’s skyline.

“If Prince can do a halftime show in all that rain, I can do this in the snow,” Klobuchar joked.

She challenged President Donald Trump to do the same.

“I would’ve liked to see him out here in the snow for an hour giving this speech," she told reporters.

Klobuchar is expected to deliver a message of unity, vowing to repair a country she claims is fractured.

While that message is consistent across the growing roster of Democratic presidential candidates, Klobuchar stands out as a well-known Midwestern candidate in a state that has traditionally voted blue, but also has seen a decline in Democratic support over the last three presidential elections.

Klobuchar celebrated a re-election victory in 2018, winning over 60 percent of the vote.

Still, the counter-protesters braved the conditions to express their discontent with the senator. Mike Madden brought a sign that said in part, "No Klobuchar" calling her "the most hawkish Democrat in the Senate."

"Among the Democrats I like Elizabeth Warren a lot, I think she's tough as nails," Madden said.

Undecided voter Bonnie Beckel, who held a sign in support of the Green New Deal, said she was coming to see what the senator had to say on climate change.

"In past I found her less than responsive to things that progressive folks want," Beckel said.

But tainting her big announcement on Sunday is a recent report by the Huffington Post claiming three people have withdrawn from consideration to lead Klobuchar’s campaign because of an alleged history of mistreating her staff.

The article cites anonymous sources who describe Klobuchar as “habitually demeaning and prone to bursts of cruelty that make it difficult to work in her office for long.”

Following her campaign announcement, the senator responded to reports of mistreating her staff following her speech, admitting she can be tough.

“I can be tough and yes, I can push people, I know that. But in the end, there are so many great stories of our staff that have been with me for years and have gone on to do incredible things,” she said.

Defending her morals, she added that she holds people and herself to a high standard.

Shelly Fisher, a local resident who is supporting Klobuchar's campaign, said she admired the senator for "telling it like it is."

"She's a woman in politics, people expect a lot from here — God forbid she asked for high expectations. If a man did that, would anyone be questioning it — I don't think so," Fisher said.

Biden will not have to cater to my agenda: Sen. Joe Manchin
A year of COVID-19: What was going on in the US in March 2020
Chipotle launches makeup collection with e.l.f. so you can look spicier than ever
Chipotle launches makeup collection with e.l.f.
NSC: Motor vehicle deaths up in 2020, despite fewer people on roads amid pandemic
After a life-threatening pregnancy, Olympian Allyson Felix joins campaign to protect pregnant people