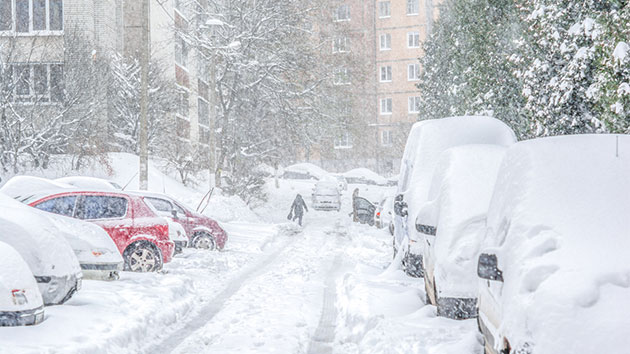 Tainar/iStock(SEATTLE) — The second winter storm in a week brought 7.9 inches of snow to Seattle on Friday night and Saturday.

Nearly 2 feet of snow fell in the mountains outside the city of Seattle, which has received 10.6 inches of snow so far in February, the most snow for the month in 70 years.

After receiving fresh snow, the city is likely going to see its coldest morning temperature since November 2010.

The area is digging out from the snow, right as two more storms are lined up to hit the area in the next two days. New winter storm watches have been posted for the metro area.

Additionally, winter storm warnings and winter weather advisories are posted for much of the rest of the West, while the region deals with mountain snow and gusty winds.

Early Sunday, heavy snow and rain are affecting parts of California. Some of this heavy rain and snow will make it down to Southern California later in the day with snow accumulations possible in the Grapevine.

Locally, 5 to 8 inches of snow will fall through Tuesday night in Seattle. With that type of additional snowfall, Seattle will be making a run at its snowiest February on record.

One of the storms that hit the West Coast is reorganizing in the central U.S. Sunday morning, and already bringing some light snow to the Central Plains. This storm will quickly race off to the east and bring snow from Minnesota to Pennsylvania later Sunday.

This storm then falls apart overnight and is suppressed from making any further movement toward the Northeast. Another storm quickly comes out of the West on Monday and brings heavy rain toward the Mississippi River Valley, and snow once again from Minnesota to New Jersey.

On Tuesday morning, snow will extend from Minneapolis to possibly New York City. Snow is likely to change to ice and rain along the Interstate 95 corridor on Tuesday morning.

However, a developing coastal low will increase precipitation in New England by Wednesday morning. Much of the Northeast will see heavy precipitation.

The result of this unsettled pattern could bring 6 inches of snow to parts of New England and parts of the Midwest through Tuesday night. Some ice accumulation looks possible from Michigan to New Jersey. And 2 to 4 inches of rain, esulting in flash flooding, are possible in spots in the Mississippi River Valley.