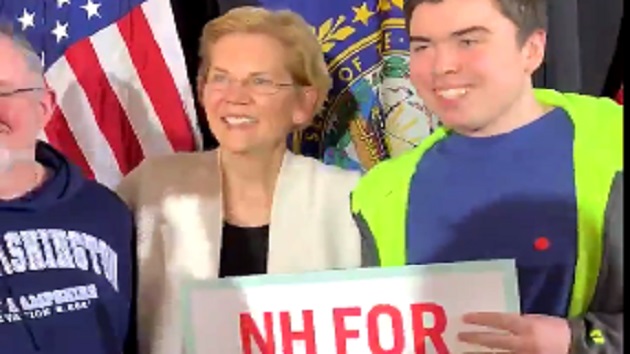 @ewarren/Twitter(DOVER, New Hampshire) — Elizabeth Warren, fresh off her official 2020 announcement, made her debut as a presidential candidate in Dover, New Hampshire, the first-in-the-nation primary state, to pitch radical changes to Washington.
The Democratic senator told the story of her childhood as one of perseverance and positioned herself as a champion for the middle class. The organizing event in an auditorium tucked inside Dover City Hall also featured a special guest on stage: her dog Bailey, alongside her entire family.
Warren reinforced her criticism of the current state of Washington, which she said “works great” for “drug companies” and “oil companies,” but not for “people trying to get a drug prescription filled” or “people worried about climate change.”
“It’s going to take big changes and we’re ready to fight for it,” she urged a crowd of about 350 people, according to her campaign staff. “This is the moment to dream big, fight hard and win.”
Warren also took questions from the audience on a range of issues, including money in politics, veterans, public education, divided government and Israel.
She again noted she will not take a “dime” of PAC money and proposed overturning Citizens United, the Supreme Court ruling that allowed corporations to spend unlimited money on political commercials.
She also cautioned, “We need to be very careful about what we ask them to do. Endless wars are not a way to honor our military or to make our country safer.”
When posed a question on Israel, she said she supported a two-state solution. And when asked about how to govern in such divisive times, Warren told a story about a bipartisan effort to make hearing aids more affordable for the 40 million people in America who need them.
But some of the attendees in the audience weren’t completely sold on Warren.
“I’ve been interested in her back from when Bernie [Sanders] was running,” said Emily Rose from Dover. “I liked everything that she had to say, there was like only one thing I wasn’t a fan of, but everything else seemed positive. I still want to see what the other candidates who are running have to say as well. I’m not completely sold on her.”
That one thing, Rose said, was the wealth tax.
Another attendee, Julia Hodges, told ABC News, “I think as a candidate she faces a lot of challenges.”
“She has credibility,” she continued. “It’s not a popularity contest. It’s about people who actually have the knowledge and the wherewithal to make the changes.”
Her stop in New Hampshire, a key state for Warren for her candidacy since it borders her home state of Massachusetts and plays a significant role in electoral politics, comes on the heels of The Washington Post releasing a report that she identified as an “American Indian” on a form for the state bar of Texas in 1986.
But many voters in Massachusetts and New Hampshire did not appear concerned about the revelation — even dismissing it as “irrelevant.”
“I don’t care,” Carrie Salinger told ABC News at the rally in Lawrence. “I don’t think it makes a bit of difference that she checked off 'American Indian.' … I won’t be the least bit bothered. It’s not important. Irrelevant.”
“My understanding is that in her childhood she was told that’s what her background was and I don’t see anything malicious about it. It’s a non-event,” said Scott DeVow from Wakefield, Massachusetts.
“I do not have any issue with that,” Rose told ABC News. “We have Native American in our ancestry. … I don’t think she should be ashamed of that. We are all made up of a lot of different things in our ancestry. I don’t think it’s a big deal. I don’t know why it’s such a big deal.”
But Hodges admitted that while she is not a Native American and does not have “skin in the game,” she would like to “see sensitivity and learning happen.”