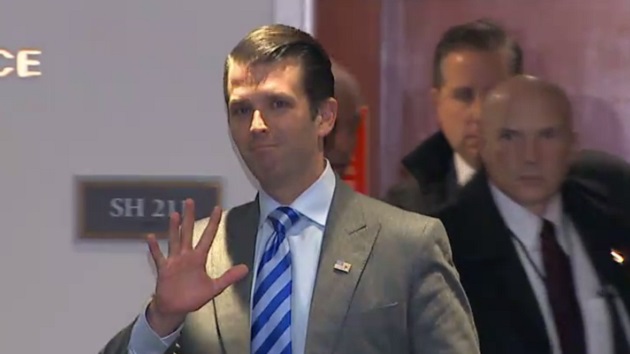 ABC News(WASHINGTON) — Donald Trump Jr. echoed his father on Saturday, applauding a joke about Native American genocide and referring to his father's crack on Democratic Sen. Elizabeth Warren's heritage as "savage."
Warren officially announced her run for president on Saturday, which drew Donald Trump's usual racist taunt of "Pocahontas" to the Massachusetts senator.
He also added, "See you on the campaign TRAIL, Liz." It's unclear why he capitalized "trail," though internet speculation immediately centered on the "Trail of Tears."
The "Trail of Tears" was a forced relocation of the Cherokee, Chicksaw, Choctaw, Muscogee and Seminole tribes in the wake of the Indian Removal Act of 1830. Tens of thousands of Native Americans were removed from their lands and forced to march to Oklahoma, with thousands dying as a result.
ABC News reached out for comment from the White House on the apparent reference, but did not receive a response.
Trump Jr. compounded his father's racist joke with an Instagram post showing a response to Donald Trump's Warren joke saying, "The Native American genocide continues with another murder by the president." Trump Jr. responded, "Savage!!! Love my President."
The nonprofit United to End Genocide estimates that there were about 10 million Native Americans before European settlement and just 300,000 left by 1900.
The president's taunts of Warren's ethnicity center around her claims of holding Native American ancestry. The senator took a DNA test last year that showed she was overwhelmingly European, but it did support the existence of an unadmixed Native American ancestor in her pedigree six to 10 generations ago.
She apologized last week after The Washington Post reported she registered for the State Bar of Texas in 1986 as an "American Indian."
The 41-year-old president's son, now officially running his father's businesses while he is commander-in-chief, often retweets or amplifies questionable material on his social media accounts. Mixed among the Instagram photos of his daily life and praise for his father are dozens of memes attacking liberals.
He mocked Christine Blasey Ford during the controversy over her allegations of abuse by Supreme Court Justice Brett Kavanaugh, compared immigrants to zoo animals in a post in January and joked Alexandria Ocasio-Cortez's socialist economic beliefs would lead to people eating dogs.
Trump Jr. has also defended his father against charges of racism, saying he has taken photos with "all the rappers, all his African-American friends."
Copyright © 2019, ABC Radio. All rights reserved