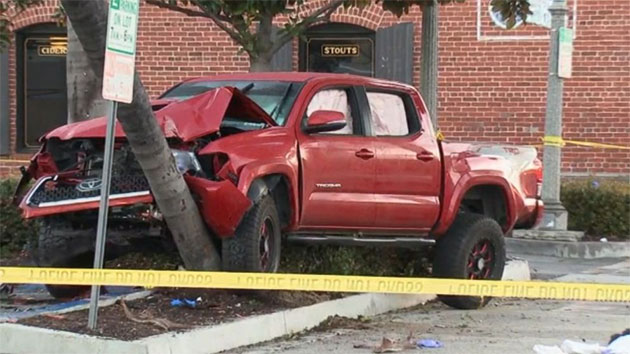 KABC(FULLERTON, Cali.) — A 22-year-old California man has been charged with felony DUI after he allegedly mowed down nine pedestrians early Sunday morning.

Christopher Solis allegedly struck and injured the victims with his red Toyota Tacoma in downtown Fullerton Sunday around 1:48 a.m., according to a statement from the Fullerton Police Department.

Solis, of Anaheim, allegedly drove the truck up onto the sidewalk and hit the pedestrians before crashing into a tree, police said. Good Samaritans and police officers had to lift the truck to free several pedestrians who were trapped underneath.

Ten people ranging in age from 18 to 49 were transported to local trauma centers with injuries ranging from moderate to critical and life-threatening, according to authorities.

Three other vehicles on the street sustained minor to moderate damage as well. Hundreds of people were on the street, sidewalk, in parking lots and in front of nearby restaurants and bars that were about to close, police said.

Solis is suspected of driving under the influence of drugs and was charged with felony DUI causing great bodily injury.