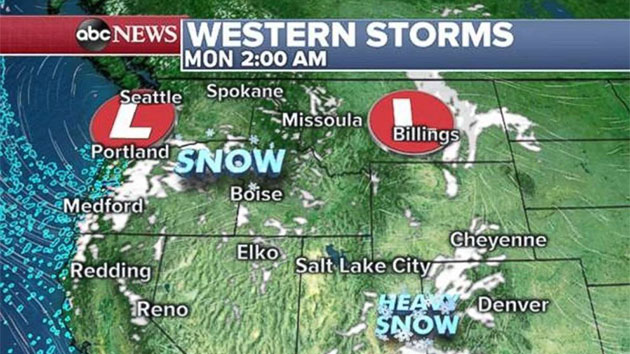 ABC News(SEATTLE) — A potent storm brought heavy snow to parts of the Pacific Northwest on Friday, including the lowland areas of the Seattle metropolitan area. This was the second round of snow the region has seen this week.

Radar on Saturday morning is showing numerous bands of heavy snow in the Seattle metro area with snowfall rates greater than 1 inch per hour occurring in some areas. Some snow is also falling toward Portland, Oregon

Seattle has already received 6.4 inches of snow at Seattle-Tacoma International Airport. This was a new daily record and the second-most snowfall in a single day in the past 20 years. It was also the most snow Seattle has received in a single day since 2012.

In Seattle, most of the snow will end during the day on Saturday, while heavy mountain snow will begin to pick up in the Sierra Nevada Mountains late Saturday.

Seattle could pick up a couple more inches of snow Saturday morning before the heaviest snow winds down. Meanwhile the heavy snow will move south and east. In the higher elevations of southern Washington and Oregon 3 to 6 inches of snow will fall, with locally up to 1 foot in the highest elevations.

The storm will combine with another system lurking near California to enhance the snowfall in the Sierra Nevadas over the weekend. Locally, 5 feet of additional snowfall will fall in the mountains this weekend.

Cold moves into eastern US

After a week where the Northeast got several tastes of spring, it is back to February across the region.

Wind chills on Saturday morning are in the single digits across the Northeast after temperatures were in the 40s and 50s on Friday. This same arctic blast is bringing wind chills 30 below zero to parts of Minnesota and North Dakota.

A new storm will quickly develop in the central U.S. on Sunday and tap into some moisture from the Gulf of Mexico. The moisture interacting with the colder air will cause light snow to spread from Minneapolis to Pennsylvania during the day on Sunday. Meanwhile, heavy rain will move into the Tennessee and Mississippi valleys.

Another storm will develop right behind that one and bring a round of snow from the Midwest to the Northeast by Monday and Tuesday. This next storm looks a little stronger and taps into a little bit more moisture.

However, it remains somewhat unclear what this storm does on Tuesday and Wednesday. There is some indication the storm will continue to strengthen and interact with another system in the Atlantic. The result could amplify the snowfall totals in both the Midwest and parts of New England by Tuesday and Wednesday.