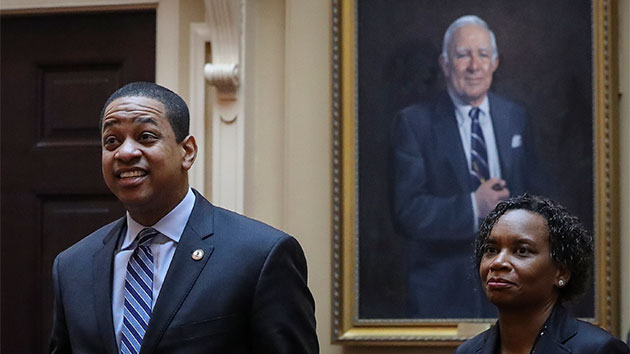 Drew Angerer/Getty Images(RICHMOND, Va.) — The fate of Virginia's lieutenant governor continued to hang in the balance this weekend as more leading state and national Democrats called on him to resign, one day after a second allegation of sexual assault emerged — and the politician responded one Saturday evening with a new statement flatly denying the allegations from both women.

In the statement, the increasingly-embattled state official called for investigations into the allegations.

"I am asking that no one rush to judgment and I am asking for there to be space in this moment for due process," Fairfax said.

That statement, in turn, appears to have prompted a blistering response from the attorney for one of the women, who volunteered that her client would be willing to testify at any future impeachment hearing.

An attorney for accuser Meredith Watson took issue with Fairfax calling an encounter with her client “consensual,” and seemed to put Fairfax on notice when she said that “my client may contact North Carolina authorities about a possible criminal prosecution.”

“There was nothing consensual about the rape of Ms. Watson…,” attorney Nancy Erika Smith wrote in a press release issued late Saturday evening.

Smith volunteered to produce two witnesses whom she said Watson “told of the assault the day after Fairfax raped her.”

“We will also produce documentary evidence of Ms. Watson revealing to others the fact that Fairfax raped her.”

Justin Fairfax, 39, has experienced a dizzying reversal of fortune in his career in the last week — from rising star and potential governor-in-waiting to fighting for his political survival after an explosive accusation of rape followed a sexual assault allegation.

Early Saturday, the Virginia Democratic party issued a statement calling for Fairfax to resign, echoing the Virginia Legislative Black Caucus' call on Friday to step down.

"Given the credible nature of the sexual assault claims against Lieutenant Governor Fairfax, it has become clear he can no longer fulfill the duties and responsibilities of his post," the state party said in a statement. "It is in the best interest of the Commonwealth that he goes through this process as a private citizen.”

On Friday, Fairfax denied what he called the “latest unsubstantiated allegation" in a statement.

"It is demonstrably false," he said. "I have never forced myself on anyone ever.”

On Saturday, Fairfax aides told ABC News that he "has no intention of resigning.”

On Saturday evening, Fairfax reiterated his denials of sexually assaulting either woman.

"I say again without reservation: I did not sexually assault or rape Meredith Watson, Vanessa Tyson or anyone else. Our American values don’t just work when it’s convenient —- they must be applied at the most difficult of times."

"As an officer of the court and a former federal prosecutor, I have dedicated my life to the law and due process," he continued in the statement. "Consequently, I call on all appropriate and impartial investigatory authorities, including the FBI, to investigate fully and thoroughly the allegations against me by Ms. Watson and Dr. Tyson. I ask that all three of us be respected during this process."

"The one thing I want to make abundantly clear is that in both situations I knew at the time, and I know today, that the interactions were consensual. I heard from Dr. Tyson after the 2004 Convention, and she never said or otherwise indicated that our interaction was not consensual or caused her any discomfort."

"Regarding Ms. Watson, I knew Ms. Watson in college both before and after the encounter, and she never said to me that our interaction was not consensual or caused her any discomfort."

"What I have just expressed is the truth," Fairfax concluded. "I want to stand here in that truth and restate that my truth, as well as the truth of Dr. Tyson and Ms. Watson, should be fully investigated and thoroughly assessed. I believe and trust that due process will provide the fairness, justice and honesty that is necessary."

“The allegations against him detail atrocious crimes, and he can no longer effectively serve the Commonwealth. We cannot ever ignore or tolerate sexual assault,” Kaine said in a statement.

Last weekend, Fairfax seemed poised to be the next governor of Virginia after photos of Gov. Ralph Northam's medical school yearbook page emerged showing two men in a racist photo: one in blackface, one in a Ku Klux Klan robe. After initially apologizing for appearing in the photo, Northam then said it was not him in the yearbook photo but admitted he had worn blackface in the past.

With Fairfax poised to lead Virginia, Vanessa Tyson, a political science professor came forward to claim that Fairfax had forced her to perform oral sex in his hotel room at the Democratic National Convention in Boston in 2004.

Aides to Congressman Scott confirmed to ABC News that he knew of Tyson's allegations against Fairfax a year ago. The staffers said they did not know what the congressman did with that information, but that he told Tyson that he agreed to speak with The Washington Post. Tyson had already given her account to The Post.

On Friday, the second woman, Meredith Watson, came forward to say that Fairfax raped her when the two were students at Duke in 2000.

"When she saw Fairfax attack Dr. Tyson, she felt a duty to another victim to come forward. That and the possibility that he could be Governor, to see him rise up into power was difficult. But when Fairfax attacked Tyson, although difficult, my client felt a need, moral and civic duty to come forward," Watson's lawyer Nancy Erika Smith told "Good Morning America" Saturday.

By Saturday, most of the presumptive Democratic nominees for president in 2020 had issued strongly-worded statements calling for Fairfax to resign, including Kirsten Gillibrand, Elizabeth Warren, Amy Klobuchar, Kamala Harris, Bernie Sanders, and Cory Booker. Former Vice President Joe Biden, who last week called for Northam's resignation and for Fairfax to lead Virginia, has not weighed in publicly.

Virginia House Delegate Patrick Hope said he will introduce articles of impeachment on Monday if Fairfax does not resign over the weekend.

“I believe these women,” Hope said. “He needs to resign immediately.”