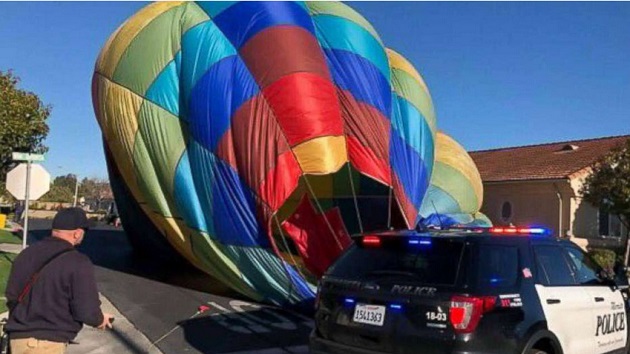 Murrieta Police Department(MURIETTA, Calif.) — A pilot was forced to land his family’s hot air balloon in a residential neighborhood in California on Thursday morning.
Brian Lynch, who has been a commercial pilot for six years, took his family’s hot air balloon for a ride with the sole purpose of airing it dry after heavy rainfall earlier this week.
Everything was going smoothly until the winds picked up and pushed Lynch out of his normal route, he told ABC News station KABC.
After Lynch began to descend, the wind slowed down. He tried landing the balloon a few times but was unable to. Finally, he found himself over The Colony, a residential neighborhood in Murrieta, where he decided it would be best to land.
The Murrieta Police Department confirmed the incident occurred shortly after 8:30 a.m. Wind speed was to blame in this unscheduled landing, police told ABC News.
Lynch told ABC News that he saw two gardeners on the street and asked them for help. He dropped down a rope they proceeded to pull him down to the ground, he said.
When asked what was going through his mind when this incident unfolded, he said, “Three words: thank you God."
Lynch said that he will be submitting a report to the Federal Aviation Administration explaining what happened after news media incorrectly called the incident an "emergency landing."
Lynch said this was not an emergency landing, it was an unscheduled landing in an unplanned landing sight.
“Only the pilot in command can declare a landing an emergency. Someone on the ground called 911, but they were mistaken and as I told the emergency responders when they arrived, I was not in need of emergency response assistance,” said Lynch.
In a statement, the FAA said the rules that apply to airplanes typically apply to balloons as well, but added that certain situations call for unplanned landings.
"Because balloons are more affected by changes in wind and temperature than other types of aircraft, pilots sometimes land in locations other than the planned landing area," an FAA spokesman told ABC News. "These events are not necessarily emergencies or violations of our regulations. The FAA investigates unplanned landings that are reported to the agency."
Police said nobody had been injured during the incident and there was no property damage.

Stormy weather pattern on the way for the West and the South
Disney California Adventure Park details ‘A Touch of Disney’ experience opening March 18
California commits $1.4 million to combat ‘horrific’ attacks on Asian Americans
Spring-like weather across much of US, possible heavy snow in Rockies and parts of West
Woman trapped for 10 hours under collapsed backyard awning in frigid weather lucky to be alive
Tiger Woods ‘calm,’ ‘lucid’ when police arrived following rollover car crash in California