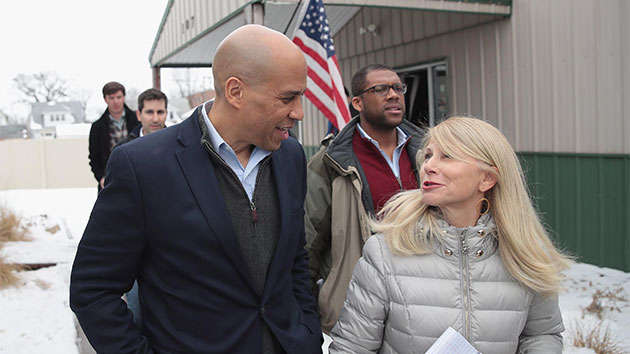 Scott Olson/Getty Images(WASHINGTON) — Senator Cory Booker crisscrossed the state of Iowa for first time as a presidential candidate on Saturday — promising to pull a divided nation back together and eschewing negative campaign rhetoric.

At times Booker, a New Jersey Democrat, discouraged crowds who would "boo" at the mention of Republican leaders. With his fresh campaign slogan “Together, America, We Will Rise,” Booker encouraged his followers them to practice compassion and work together with their political opponents to find common ground.

“I have to beat Republicans, but unite Americans,” he said.

The statement is reminiscent of former President Barack Obama, who memorably told crowds, “Don’t boo. Vote!,” during his 2012 presidential campaign.

As Booker traveled to campaign events that stretched from the rural sections of Iowa to the state’s capital, many residents said they felt that his rhetoric mirrored Obama’s 2008 and 2012 campaign messages of “Hope and Change."

“I think when they look at him they will see Barack Obama and they’ll think…‘Oh my God, remember what it was?,” said Rita Robinson, Cedar Rapids resident.

Robinson, a black woman, was on hand for Booker’s campaign forum at the African American Museum of Iowa in Cedar Rapids. She said she was astonished by how few blacks were sprinkled throughout the crowd, but said she believed that “it isn’t about color, it’s about the man and the integrity he has.”

Robinson said she is putting her support behind Booker, in part because she believes he’s the only candidate who can beat Trump. When asked about the other black candidate in the race, including presidential hopeful and Democratic Senator Kamala Harris, Robinson questioned her viability as a presidential candidate because of the combination of her race and gender.

“I don’t think we’re ready for black and female," Robinson told ABC News. "I wish, but I don’t,” she said.

Iowa is 90 percent white, with blacks accounting for about four percent of the state’s population, according to the U.S. Census.

Regardless of the makeup of the crowds, at some events the turnout exceeded the space available — as attendees gathered close together to escape the often-single digit temperatures outside.

Booker's largest event at the Des Moines Social Club drew 500 people, according to campaign aides. Even in front of a mostly white audience, Booker called for social justice in Iowa and referenced the civil rights movement.

Iowa is a key state in presidential elections — it holds the first caucus in the nation and in turn sets the tone for the rest of the nation. It’s not unusual for residents to bump into a presidential candidate at a local coffee shop or restaurant — vying to pitch voters on why they deserve to represent the country.

But for Booker, Iowa is much more personal. The senator’s maternal grandmother was born in Iowa and he has several relatives that live in the state.

Booker's family ties took center focus in his campaign speech to voters. He mentioning that in Buxton — a coal mining town where his grandmother lived — people of all races worked together to fuel America.

At every stop, Booker fell back on his central theme of unity, even calling this election “a test to see how we can unite America.”

While the message resonated with many, others weren’t so impressed.

“I thought he talked too much about himself and [didn't tell] us the plans for the future and [how he would put] those plans into action now,” Allen Max Richards said after attending Booker’s forum in Marshalltown.

When asked how he would confront possible cynicism from President Trump, Booker fell back on the “golden rule” promising to not fight fire with fire.

Still, the senator did not shy away from taking on Trump.

“We have a president that has a real problem relationship with the truth,” he said.

Booker also spotlighted issues that will be at the center of his campaign: supporting the Green New Deal, championing criminal justice reform, including ending private prisons, and allowing the Department of Health and Human Services to negotiate down drug prices on behalf of millions of Medicare recipients.

Vowing to the never take money from pharmaceutical companies or corporate political action committees, Booker concluded the first campaign stop in Iowa with selfies and hugs as Iowans waited a few hours just to meet the next presidential hopeful who stops by -Sen. Elizabeth Warren.

Within just a few hours of Booker’s first event, the Iowa Republican Party quickly released a statement criticizing him.

“Cory Booker will say just about anything to stand out in the Democrats’ crowded field of coastal liberals,” Iowa GOP Chair Jeff Kaufmann said in a statement.

“Iowans can see through his theatrics and still reject his policies – like his embrace of trillion dollar government programs, burdensome regulations for Iowa farmers and his plan to eliminate private health insurance," Kauffman said.