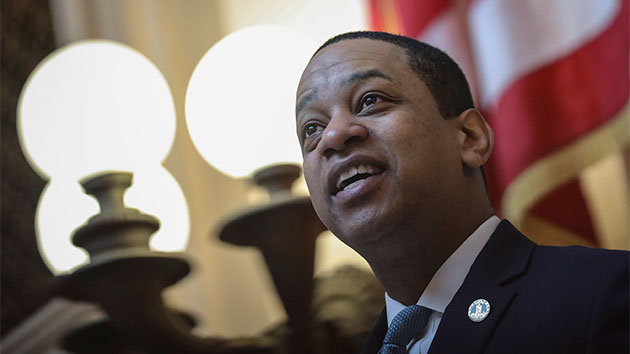 Drew Angerer/Getty Images(RICHMOND, Va.) — A second woman came forward Friday to accuse Virginia Lt. Gov. Justin Fairfax of sexual assault.
Through a statement released by her attorney, Meredith Watson claims that Fairfax raped her while the two were students at Duke University in 2000.
“On behalf of our client, we have notified Justin Fairfax through his attorneys that Ms. Watson hopes he will resign from public office,” Nancy Erika Smith said in a statement.
Shortly afterward, Fairfax issued a statement denying what he called the “latest unsubstantiated allegation. It is demonstrably false. I have never forced myself on anyone ever.”
He added that he has previously passed FBI background checks and is demanding a full investigation into the claims, adding: “I am telling the truth.”
“I will not resign,” Fairfax said.
Still, pressure continued to mount late into Friday night, when Virginia House Delegate Patrick Hope said that if Fairfax does not resign by Monday, he will introduce the articles of impeachment.
“I believe these women,” Hope said. “He needs to resign immediately.”
When asked why he is introducing articles of impeachment for Fairfax, but not for Northam or Herring, Hope said Fairfax is being accused of a crime.
“Well the distinction between a sexual assault or a rape is clearly very different and the articles of impeachment under the constitution are very clear, high crimes of misdemeanor [and] this clearly meets that threshold," Hope told reporters. "While the events that occurred 30-some years ago with the governor and the attorney general, while they’re heinous and clearly insensitive — they don’t rise to the same level.”
Around the same time that Hope making his statements, the Virginia Legislative Black Caucus likewise called for Fairfax to resign.
"In light of the most recent sexual assault allegations against [Fairfax], the Virginia Legislative Black Caucus believe it is best for [Fairfax] to step down from his position."
"While we believe that anyone accused of such a grievous and harmful act must receive the due process prescribed by the Constitution, we can't see it in the best interest of the Commonwealth of Virginia for the Lieutenant Governor to remain in his role."
The latest accusation comes after another allegation earlier this week against him deepened the political chaos in the state.
On Wednesday, Vanessa Tyson, an associate professor of politics at Scripps College in California, who cclaimed that the then 25-year-old Fairfax sexually assaulted her in a hotel room during the 2004 Democratic National Convention in Boston.

"On the night of Friday, February 1, 2019, I read multiple news accounts indicating that Virginia Lt. Governor Justin Fairfax would likely be elevated to Governor as an immediate result of a scandal involving Governor Ralph Northam. This news flooded me with painful memories, bringing back feelings of grief, shame, and anger that stemmed from an incident with Mr. Fairfax that occurred in July 2004 during the Democratic National Convention in Boston," Tyson wrote in a statement released through her legal team.

The allegations against Justin Fairfax are serious and credible. It is clear to me that he can no longer effectively serve the people of Virginia as Lieutenant Governor. I call for his immediate resignation.

A number of 2020 Democratic presidential candidates, including Sen. Cory Booker of New Jersey and Sen. Kirsten Gillibrand, released statements on Twitter Friday evening calling on Fairfax to step down.

The multiple detailed allegations against the Lt. Gov. of Virginia are deeply troubling. They are serious, credible, and corroborated by others. It is no longer appropriate for him to serve. He should resign.

My statement below on Virginia Lt. Governor Justin Fairfax: pic.twitter.com/chu4oSdnbh

In a joint statement released Friday, five Democratic members of the Virginia congressional delegation, Reps. Abigail Spanberger, Elaine Luria, Don Beyer, Gerry Connolly and Wexton all called on Fairfax to step down.
"Lt. Governor Fairfax has also shown exceptionally poor judgment in his handling of these allegations. He repeatedly attacked his accuser, he reportedly used vile and degrading language to describe her, he mischaracterized an investigation into the encounter, and he sought to blame others for events in his own past. These actions do not meet the standard to which we hold Virginia’s highest elected officers," the statement read.
"For these reasons, we believe that Justin Fairfax cannot continue to serve as Lt. Governor Of Virginia, and should step aside," they added."
Additionally, Rep. Donald McEachin called on Fairfax to step down.

Given recent developments, I believe that it is best for the Commonwealth of Virginia if Justin Fairfax dealt with these accusations as a private citizen. He can no longer serve us as the Lieutenant Governor of Virginia.

The Republican Party of Virginia released a statement Friday calling for the claims of both Tyson and Watson to be "investigated thoroughly."

This is the second serious sexual assault allegation leveled against the Lieutenant Gov. in the past week. As with with Dr. Tyson's allegation, it needs to be investigated thoroughly because it impacts his ability to continue to serve the Commonwealth.https://t.co/nHQkEpj5pE

The new questions about Fairfax come as the state's other top two elected officials, Gov. Ralph Northam and Attorney General Mark Herring, also Democrats, face controversies of their own.
Northam continues to remain in office despite near-universal calls for his resignation after a racist photo of a man in blackface and another in Ku Klux Klan robes appeared on his 1984 medical school yearbook page.
All eight major Democratic presidential candidates have called on Northam to step down.
State Attorney General Mark Herring meanwhile dropped another political bombshell on the state Wednesday, revealing in a statement that in 1980 he dressed up as rapper Kurtis Blow and wore "brown makeup," to a college party.
"In the days ahead, honest conversations and discussions will make it clear whether I can or should continue to serve as attorney general, but no matter where we go from here, I will say that from the bottom of my heart, I am deeply, deeply sorry for the pain that I cause with this revelation," Herring, who met Wednesday with African-American leaders in the Virginia state legislation, wrote in a statement.
In a statement released Thursday, the nine Democratic members of Virginia's congressional delegation released a statement saying Herring "earnestly reached out" to them to apologize and "express his deep remorse."
The members reiterated their calls for Northam to resign and said the allegations against Fairfax "need to be taken very seriously, and we respect the right of women to come forward and be heard."
Copyright © 2019, ABC Radio. All rights reserved