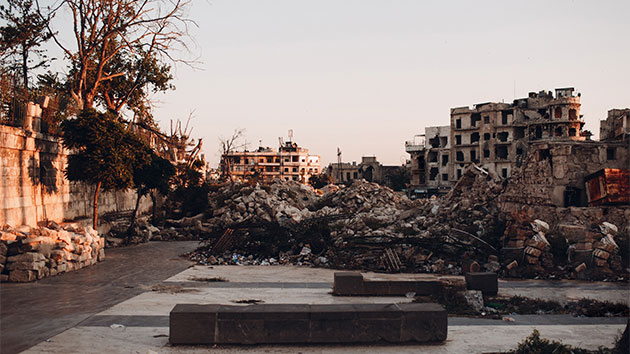 primipil/iStock(WASHINGTON) — The U.S. military is proceeding with its 120-day plan to pull all U.S. troops and equipment out of Syria by the end of April, although so far only equipment and supplies have been removed. However, U.S. officials say the White House will have to tell the military within a matter of weeks whether to proceed with the actual removal of troops.
Two U.S. officials say the U.S. military withdrawal plan is proceeding independently of the White House effort to get guarantees from Turkey not to attack America’s Kurdish allies after U.S. troops pull out. So far, Turkey has rejected U.S. proposals to make that happen.
As U.S. military equipment continues to flow out of Syria the officials say that in coming weeks the White House will have to make a decision about whether to begin the removal of U.S. troops.
That White House decision will be necessitated by the growing risk posed to troops in Syria as the withdrawal plan continues to remove gear and moves on to close U.S. bases.
The Pentagon continues to say there are no timelines associated with the removal of U.S. troops.
“We are not discussing the timeline of the U.S. withdrawal from Syria,” said Cmdr. Sean Robertson, a Pentagon spokesman.
In mid-December President Trump made the surprise announcement that he was withdrawing the 2,000 U.S. troops in Syria that have been advising and assisting the U.S.-backed and Kurdish-led Syrian Democratic Forces (SDF) in its fight against Syria.
In the last month, more than 10 percent of the U.S. equipment and supplies in Syria have been removed from Syria, according to two U.S. officials.
Ironically, the U.S. troop presence in Syria has grown to 3,000 as additional military personnel have been brought in to prepare equipment and personnel to leave the country.
Earlier this week Gen. Joseph Votel, the commander of U.S. Central Command, told lawmakers that he had not been consulted about the decision.
What was initially a request for the American troops to withdraw in 30 days was adjusted to a more “deliberate” timeline of 120 days that would be completed by the end of April.
Operating under then-Defense Secretary James Mattis’ orders U.S. military planners crafted a withdrawal plan that would first take out equipment and supplies and then see the departure of U.S. troops.
As the withdrawal plan continues apace with the support of hundreds of U.S. airstrikes and support on the ground America’s Kurdish allies are on the verge of defeating the last remnants of ISIS fighters in Syria.
The last 1,000 ISIS holdouts are trapped in a small cluster of villages in eastern Syria no larger than a few square miles.
U.S. officials believe the SDF will be able to defeat those remaining ISIS fighters “in days” bringing to an end ISIS’s claim of a territorial caliphate.
But even after that victory, American troops will continue to work with the SDF to “back clear” desert areas where some ISIS fighters may have fled.
On Wednesday, President Trump told the 79 members of the anti-ISIS coalition meeting in Washington that the United States would continue to “destroy” any “remnants” of ISIS.
Copyright © 2019, ABC Radio. All rights reserved