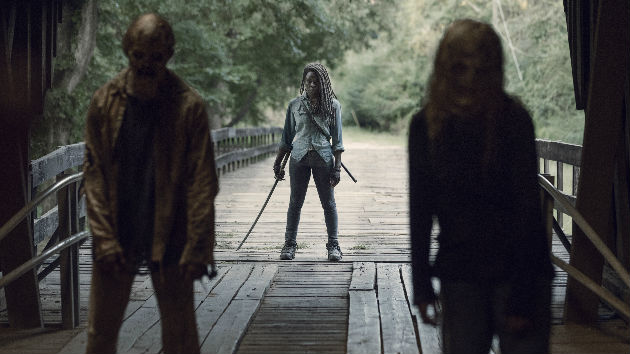 AMC(NEW YORK) — Danai Gurira is gearing up for the return of the second half of The Walking Dead's ninth season, which premieres Sunday night.
The series recently underwent major shifts in story development and cast, with actor Andrew Lincoln — and his hero Rick Grimes — leaving the post-apocalyptic drama.
"It's been a big transition this year with the Rick character leaving and then we leaped six years forward, which was kind of thrilling to do," Gurira told Good Morning America.

"But there's a lot of information, a lot of mystery around what happened in those six years and we have a new enemy that's kind of the scariest yet.
The ninth season ended halfway on a cliffhanger, with Gurira's Michonne and the other heroes discovering — with near fatal results — a faction known as The Whisperers.

The baddies disguise themselves as walkers by wearing the faces of the undead as masks.

Danai said, "We can't tell when they're coming at us so it's a whole new thing."
Gurira, who also starred in the Oscar-nominated blockbuster Black Panther, said she's excited about the movie's upcoming appearance as a Best Picture nominee. "We just came into it really wanting to make something that was alive and resonate and we poured all we had into it," Gurira said of the film. "We knew it was an unusual moment. It was a new platform to create something like this…we just committed every day fully and we were such a team, which was such a blessing. We became a family."

The Walking Dead returns Sunday night at 9 p.m. on AMC.