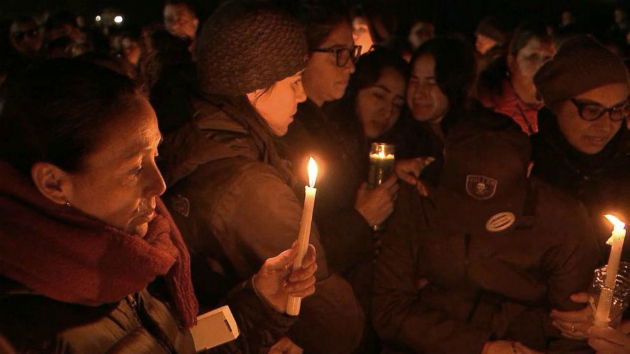 ABC News(NEW ROCHELLE, N.Y.) — Tears, embraces and prayers filled a candlelight vigil Thursday for a 24-year-old woman whose body was found in a suitcase along a Greenwich, Connecticut, road.
Valerie Reyes, 24, of New Rochelle, New York, was found Tuesday with her hands and feet bound, authorities said.
The cause of death has not been confirmed, Greenwich Police Capt. Robert Berry said Wednesday. However, homicide detectives are investigating the case.
No arrests have been made.
"My daughter did not deserve whatever you did to her," Reyes' mother, Norma Sanchez, said at Thursday's vigil in New Rochelle, reported The Rockland/Westchester Journal News.

"My daughter was pure. My daughter was a good soul," Sanchez said.
She added, to whoever did this to her daughter: "You will get caught."
Reyes was last seen on Jan. 29 and was later reported missing to the New Rochelle Police, Berry said.
Sanchez told ABC New York station WABC-TV on Thursday that Reyes, who occasionally suffered from anxiety and depression, had been fearing for her life.
"She didn't mention no one specific, she just mentioned, 'I'm really really scared. I'm paranoid, Mommy, I'm getting anxiety attacks,'" Sanchez told WABC.
Reyes recently had a boyfriend and Sanchez said they broke up days before she went missing.
Sanchez asked her daughter if someone threatened her, and asked about her ex, but Reyes said no, Sanchez told WABC.
In a statement Wednesday, Barry did not mention any persons of interest. He did say, however, that Greenwich investigators "have received a multitude of tips."
The detectives are "are asking the public for any information they may possess concerning Valerie and/or her disappearance."
Angelica Reyes said she believed Valerie Reyes, her cousin, was in New York City.
"So we thought she was looking for help," said Angelica Reyes, according to WABC-TV.
Greenwich sits along the New York-Connecticut state border. New Rochelle is about 12 miles south of Greenwich.
Anyone with information is asked to call the Greenwich Police tip line at (203) 622-3333.
Copyright © 2019, ABC Radio. All rights reserved.