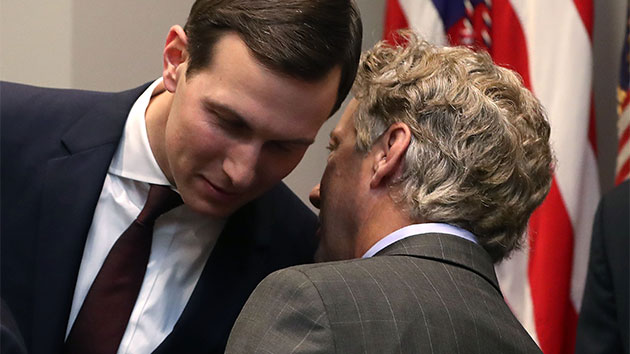 Mark Wilson/Getty Images(WASHINGTON) — President Donald Trump's campaign has spent nearly $100,000 of donor money to pay legal bills to the firm representing Jared Kushner, the latest campaign finance records show.
The president's re-election campaign made two payments to the firm, Winston & Strawn LLP – $55,330 and $42,574. The expenditures were payments to Kushner's attorney Abbe Lowell for Kushner’s legal fees, sources with knowledge of the payments told to ABC News. Lowell joined the firm in May 2018.
“Low dollar” contributions – $200 or less – made up 98.5 percent of the total funds raised by the Trump campaign in the last quarter of 2018, a consistent trend throughout the year, according to a press release by the campaign, along with the latest campaign finance filings.
Kushner, who is married to Trump’s eldest daughter Ivanka, is a real estate scion who earned more than $1.7 million in income in 2015, the year before he joined his wife’s family to work in the White House, according to a New York Times review of confidential financial documents published in October. His net worth has been estimated at more than $300 million.
Like many Trump campaign insiders, Kushner has required legal guidance as he has attempted to navigate the special counsel and congressional investigations into Russian interference in the 2016 elections. Kushner has not been accused of any criminal wrongdoing.
A spokesman for the Trump campaign declined to comment on the decision to direct campaign money to the legal fees facing the president’s son-in-law.
Peter Mirijanian, a spokesperson for Lowell, said the payments extend only to legal fees incurred for litigation involving Kushner’s work on the campaign.
“This legal work was performed on behalf of the Trump campaign to assist them in defending against a baseless and political case brought by the DNC,” Mirijanian said in a statement. “All campaigns and business cover the legal expenses of people working for them when sued. Mr. Kushner has personally paid all of his separate legal fees to date.”
One source familiar with the reimbursements told ABC News that near the end of 2018, the campaign covered legal expenses for several former senior staff members who had testified before congressional committees. The House intelligence committee had afforded each person who testified the chance to have a lawyer review a transcript of their testimony as part of a plan to eventually see the transcripts made public.
Senior members of the campaign have incurred legal expenses in connection with a civil suit by the Democratic National Committee. It is unclear whether the campaign also reimbursed those campaign officials for those expenses.
The DNC filed the civil suit in April accusing a long list of defendants, Kushner among them, of being part of a conspiracy involving Russia’s effort to interfere in the 2016 presidential election.
In December, Lowell filed a 22-page motion seeking to have a judge remove Kushner from the suit. In it, Lowell disputed the allegation that Kushner was part of a conspiracy against the Democrats in 2016, saying the DNC lawsuit “does not contain a single factual allegation implicating Kushner in the alleged wrongdoing.”
There has not yet been a ruling on the motion.
Kushner also spent a total of more than nine hours during two interviews with Mueller's team. The first meeting, which happened in late 2017, largely dealt with Trump's former national security adviser Michael Flynn, and the second meeting, which occurred in April of 2018, focused on the campaign, the transition and other topics, including the circumstances of the firing of former FBI Director James Comey, as ABC News has previously reported. “I would say it is the definition of cooperation,” Lowell told CNN last year.
Kushner isn't the only one to receive financial help from the campaign fund.
Since 2017, the Trump campaign and the Republican National Committee have been patrons for a number of former and current Trump associates caught up in the special counsel probe into Russian meddling in the 2016 presidential election.
This includes more than $276,000 the Trump campaign spent between October 2017 and April 2018 to cover some of the legal bills for the president's then personal attorney Michael Cohen, who was in a joint defense agreement with Trump.
The Republican National Committee also paid nearly $590,000 to a firm representing Trump's former communications director Hope Hicks, who appeared before the House Intelligence Committee last February for a closed-door interview related to Russia interference. According to Republicans and Democrats on the panel, Hicks refused to answer questions about her time in the White House. The Trump campaign and the RNC together also paid firms representing Donald Trump, Jr., more than $514,000.
More recently, the Trump campaign paid more than $173,000 to Mintz, Levin, Cohn, Ferris, Glovsky & Popeo, a law firm that has represented former Trump campaign manager Corey Lewandowski, and more than $101,000 to Larocca, Hornik, Greenberg & Blaha, a firm that represents Trump's security team. The campaign also drastically upped its payment to Trump's attorney Mark Kasowitz' firm, according to the latest campaign finance report.
The Trump campaign has spent more than $6.7 million in legal fees in the last two years.
In the last few months, a legal defense fund linked to the Trump campaign has also been lending a hand to campaign aides looped into the Russia investigation, with generous checks from big Trump donors, such as casino mogul Sheldon Adelson, recycling executive and Mar-a-Lago member Anthony Lomangino, and Beverly Hills real estate developer Geoffrey Palmer, according to disclosure reports filed to the Internal Revenue Service.
The Patriot Legal Expense Fund Trust has reported several payments labeled "legal consulting" to firms linked to the Trump campaign aides, including Lewandowski's firm Mintz Levin and Schertler & Onorato, which has represented former Trump bodyguard Keith Schiller.
Identities of people being supported by the fund are still under veil as the disclosure reports only listed law firms that are being paid by the fund, not the clients. The fund's guidelines state that Trump himself and his family members are prohibited from getting help from the Patriot Fund.
Copyright © 2019, ABC Radio. All rights reserved