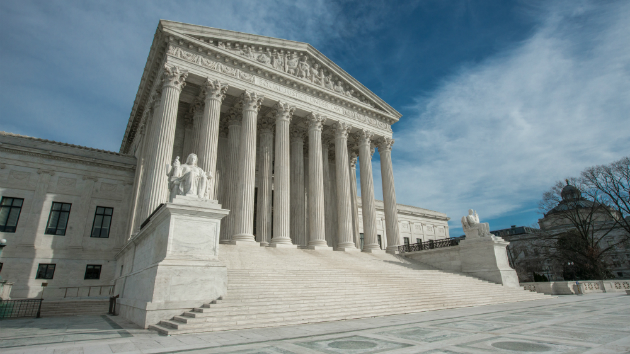 dkfielding/iStock(WASHINGTON) — The Supreme Court has temporarily put on hold a controversial Louisiana abortion law set to take effect Friday which requires abortion providers in that state to have admitting privileges at a hospital within 30 miles.
Chief Justice John Roberts joined with Justices Elena Kagan, Ruth Bader Ginsburg, Stephen Breyer and Sonia Sotomayor to grant an emergency stay while the case proceeds.
Critics of the law argue it would severely limit access to abortion services in Louisiana by disqualifying the small handful of clinics that perform the procedures. Supporters say the state has the right to regulate the clinics to ensure safety.
The request for a stay in the case, which the high court has not yet decided on whether to hear, is seen as the first major test on abortion for the court's new conservative majority and President Donald Trump's two appointees to the bench.
Justices Brett Kavanaugh, Neil Gorsuch, Clarence Thomas and Samuel Alito all dissented from the decision and would have allowed the law to take effect as appeals proceed.
Kavanaugh, writing for the first time from the high bench on the issue of abortion, argued that Louisiana's four abortion doctors have plenty of time to obtain the admitting privileges they need before the restrictions take effect after a 45-day transition period.
"The case largely turns on the intensely factual question whether the three doctors [in Louisiana]…can obtain admitting privileges. If we denied the stay, that question could be readily and quickly answered without disturbing the status quo or causing harm to the parties or the affected women, and without this Court’s further involvement at this time," Kavanaugh wrote.
"These three doctors could lawfully continue to perform abortions at the clinics during the 45-day transition period. Furthermore, during the 45-day transition period, both the doctors and the relevant hospitals could act expeditiously and in good faith to reach a definitive conclusion about whether those three doctors can obtain admitting privileges," he said.
The Supreme Court rejected a similar abortion law in Texas in a 5-3 decision in 2016, saying it created an "undue burden" on women seeking access to abortion.
In the Louisiana case, the Fifth Circuit Court of Appeals recently ruled that the state law is substantively different from the Texas measure and should be upheld because it does not "impose a substantial burden on a large fraction of women" in the state.
"Today’s decision maintains a critical lifeline for women in Louisiana, who already face some of the bleakest outlooks for reproductive freedom," said Ilyse Hogue, president of NARAL Pro-Choice America, an abortion rights group. "The Supreme Court rightfully refused to uphold a brazen and unconstitutional attempt to ignore identical cases that are intended to shutter abortion clinics in the state, making Roe v. Wade obsolete."
The Supreme Court will now consider whether to grant a writ of certiorari and issue a final opinion in the case.
Copyright © 2019, ABC Radio. All rights reserved.