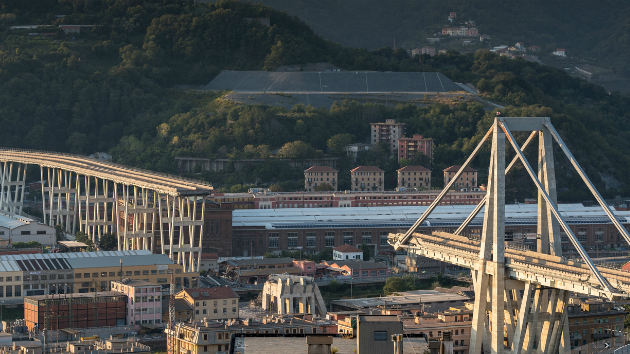 Luca Reina Mafaraci/iStock(ROME) — Nearly six months after the deadly collapse of the Morandi Bridge in Genoa, the demolition of the remainder of the span began in earnest Friday.
Italian Prime Minister Giuseppe Conte, Danilo Toninelli, the country's minister of infrastructure and transport, and other officials — donning hard hats — listened as the chief engineers explained how a 36-meter portion of the bridge was going to be slowly detached.
"In the days following the tragedy we often repeated a phrase, 'Genoa in our hearts,'" Conte tweeted on Thursday ahead of his visit. "Tomorrow I go back to Genoa, which has never left my thoughts or heart."
Using four steel jacks — the same as those used to right the Costa Concordia cruise ship, another recent Italian engineering feat — workers plan to carefully lower the sections over the course of about eight hours, engineers told officials.
A 200-meter portion of the viaduct in the large port city collapsed in August during busy lunchtime traffic. The accident, due to structural failure, caused dozens of vehicles to plummet to the ground.
The collapse killed 43 people and injured dozens of others.
A judicial investigation is still underway to determine the cause and accountability.
Following the tragedy, about 600 people, who had been living in buildings under the flyover viaduct, had only a few hours to leave their homes and find alternative housing.
Marco Bucci, Genoa’s mayor and commissioner in charge of the bridge’s reconstruction, said the removal of an 800-ton portion of the bridge is only part of the job because there is still much to be done, according to RAINNews24 tv. He did tell the station, however, that approximately 3,000 tons of material have already been removed over the last few months.
Giovanni Totti, the governor for the region, said the demolition was a "symbolic moment," and that "all Italians will finally be able to see a dramatic change to the bridge's skyline," according to RAINNews24 tv.
Conte, meanwhile, added he would return regularly to see the bridge’s reconstruction and that the new bridge must be inaugurated as soon as possible.
The reconstruction of the bridge will begin on March 31 while the demolition is still underway.
Toninelli reiterated that the new bridge should be inaugurated next year and said that the new viaduct will be "the image of the revival of the country," according to Italian Tv Tgcom24.
Copyright © 2019, ABC Radio. All rights reserved.