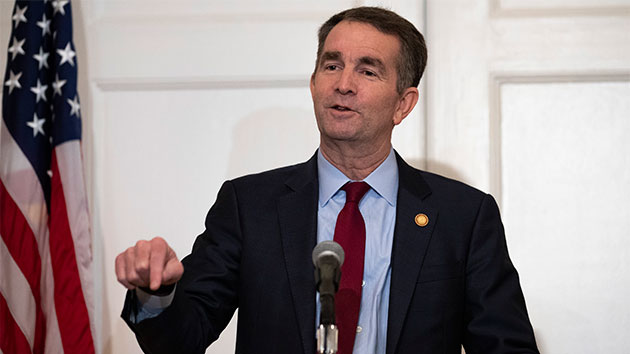 Northam, apologized for the photo, which depicts two men, one in a Ku Klux Klan robe and another in blackface, on his yearbook page and then denied he was in it. He has not been seen in public since Saturday where he made it clear he does not plan to resign.

Sources told ABC News the governor had come close to announcing he would resign, before changing his mind Saturday.

Northam has remained holed up in the governor’s mansion next to the Capitol, consulting with a small group of advisers daily, according to sources familiar with the meetings.

The governor said Saturday "as long as I feel that I can lead, I will continue to do that. If I reach a point where I am not comfortable with that, then obviously we will sit down and have that discussion."

Blocks away on the other side of the Capitol, Attorney General Mark Herring scurries quickly in and out of his office when he arrives and leaves work for the day, avoiding questions from reporters. His office looks directly across the square from the governor’s mansion, with the capitol in between.

Lt. Governor Justin Fairfax, on the other hand, hasn't remained out of public view and reports to the Capitol for work every day. Reporting to work on Friday, Fairfax told ABC News “we’ll have our say, I’m confident in truth,” when asked about his message to Virginians.

He has denied allegations he sexually assaulted a woman in 2004, calling the allegations against him a smear campaign. and has now taken on the legal team who represented now Supreme Court Justice Brett Kavanaugh when he faced accusations of sexual misconduct.

"I take this situation very seriously and continue to believe Dr. Tyson should be treated with respect. But, I cannot agree to a description of events that simply is not true," Fairfax said in a statement earlier this week.

The woman who accused Fairfax, Vanessa Tyson, an associate professor of politics at Scripps College in California, is now represented by the lawyers who litigated for Christine Blasey-Ford, one of Kavanaugh's accusers.

And now another Virginia lawmaker is having to explain something in his past.

Senate Majority Leader Thomas Norment, a Republican, was managing editor of the 1968 yearbook of the Virginia Military Institute which featured several students in blackface and comments with racial slurs. Norment addressed the matter, saying he was not in any of the photos in question and condemned the use of blackface calling it "abhorrent" saying he advocated for racial integration at VMI.

A spokesperson for VMI confirmed to ABC News that Norment was the managing editor and confirmed the photos in question.

"In recent years we've improved procedures and the yearbook is more professionally done and we are actively trying to take lessons from the past so that we can do better in the future," VMI's director of communications and marketing, Col. Steven D MacInnis, told ABC News.

Several Virginia state senators and delegates heading into the capital Friday morning would not answer questions about the leadership chaos in their state.

Specific questions about the calls for an investigation of Lt Gov. Fairfax were also met with silence, though one delegate said simply “not my job” as he rushed away from reporters.
Multiple lawmakers have said they don’t expect Northam to resign.

"I don't think anyone's resigning," said Republican Delegate Terry Kilgore. Some delegates told ABC News they wanted to hear from their constituents on the growing scandal as they head home for the weekend.

A group of Democrat congressional leaders from Virginia have reiterated their call for Northam to resign. The same group of lawmakers, however, did not say if Herring should resign, despite his admission that he engaged in blackface in his past.

“We understand that he is currently engaged in in-depth discussions with leaders and others in Virginia. The Attorney General must continue those conversations, and stand ready to answer questions from the public if he is to regain their trust,” the release read.

The Virginia Legislative Black Caucus has echoed these views late Thursday, saying, “While we appreciate the candor of Attorney General Herring’s disclosure, we await further action on his part to reassure the citizens of the Commonwealth his fitness for leadership.”

The group also went on to say that the sexual assault allegations against Fairfax should be investigated.

So what happens next?

Should all three – Northam, Fairfax and Herring – decide to step aside, the next in the line of succession is House of Delegates Speaker Kirk Cox, a Republican.

Asked by ABC News this morning if he thinks he'll be governor, Cox said. “I don't have anything to add to what I've said.”

Earlier this week, Cox called the revelations by all three leaders "disturbing."

"The people should be confident that our work continues unimpeded and that the Commonwealth’s 100,000 state employees also continue to serve without disruption," Cox said in a statement.

And while local and national Democrats are calling for an inquiry into the Fairfax allegations, it's highly unlikely that will be done by the Virginia legislature.