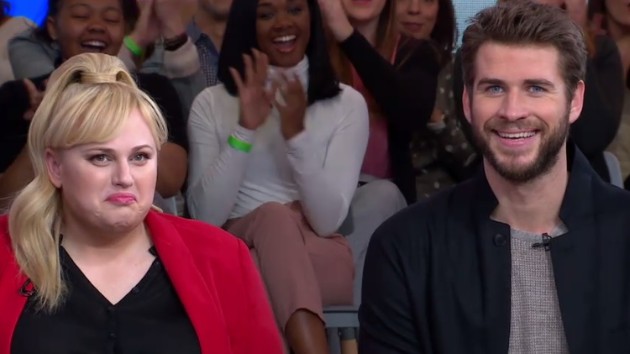 ABC(LOS ANGELES) — Rebel Wilson and Liam Hemsworth co-star in the new rom-com, Isn't It Romantic, but the pair might re-team again — for a triple date on Hemsworth's first Valentine's Day with his new wife Miley Cyrus.
About his December 2018 wedding to Cyrus, Hemsworth said on Good Morning America that it was very "intimate," adding, "It was a really special day."

But Cyrus isn't apparently the jealous type: he invited Wilson along on their first V-Day date as a married couple, seeing as how well Rebel got on with Hemsworth on set.
In the film, Wilson's character hits her head and wakes up to discover that she's playing the leading lady in a romantic comedy with Hemsworth as her love interest.
"I don't think I could've got anyone better," Wilson said of her co-star. "Liam, not only is he just such a lovely guy, he's so funny in the film and he sings and dances in the film too."

In fact, one scene — which had to be performed over and over, thanks to the movie's Groundhog Day-like plot — has a shirtless Hemsworth repeatedly diving on Wilson, who's in bed.

"What was going on with me during that day, is two of my toenails had come off, and we were supergluing them under the bedsheets," Wilson confessed. The injury was from a stunt gone wrong on set, the actress told Hemsworth, adding, "I didn't want to tell you because it was such a sexy scene."
As for that "triple date"? It was Miley's idea. "I think she should've asked Liam before," the single actress said, laughing. "If I get desperate, great option."
Hemsworth chimed in, "I'm all for it. Absolutely."
Isn't It Romantic hits theaters February 13.

Lawsuit challenges Michigan secretary of state’s ban on open-carry guns at polls on Election Day
Here’s what happened on the ‘Legally Blonde’ 20 year reunion special
International Pronouns Day: What to know about using pronouns
Pregnant woman ran a mile in less than 6 minutes a week before her due date
Trump trailing behind Biden in funding, weeks before Election Day, new filings show
Report: Dominic West in talks to play Prince Charles on final seasons of ‘The Crown’