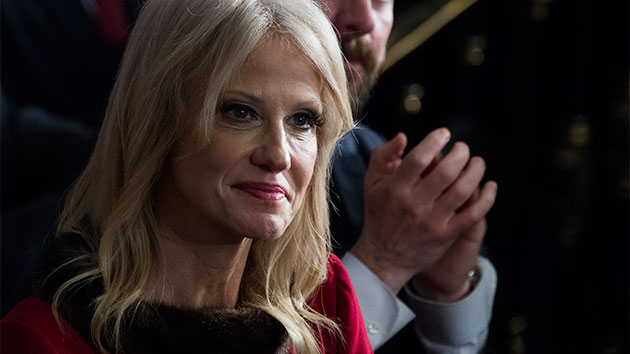 Tom Williams/CQ Roll Call(WASHINGTON) — White House counselor Kellyanne Conway said in an interview that aired Friday on CNN that a woman assaulted her while she was at a Maryland restaurant celebrating her middle school-aged daughter's birthday.
The incident happened last October at an Uncle Julio's Mexican restaurant in Bethesda, Maryland. The woman, identified by police as 63-year-old Mary Elizabeth Inabinett, is scheduled to appear in court in late March, according to a police report obtained by ABC News. She was charged with assault in the second degree and disorderly conduct in late November.
Conway described being grabbed by the shoulders and shaken. She said she turned around, expecting to see a friend but instead said she found the woman "screaming and making aggressive hand gestures toward her" that Conway said she thought were related to her political views, the police report said.
At one point, Inabinett allegedly shouted "shame on you," according to the report.
"Conway stated that the shaking lasted a few seconds but the suspect continued to yell and gesture at her for approximately 8-10 minutes before she was escorted from the restaurant," according to the police report.
In a statement, Inabinett's lawyer, William Alden McDaniel Jr., denied his client assaulted Conway.
"Ms. Inabinett saw Kellyanne Conway, a public figure, in a public place, and exercised her First Amendment right to express her personal opinions. She did not assault Ms. Conway. The facts at trial will show this to be true, and show Ms. Conway’s account to be false," McDaniel said in the statement.
In the account from Conway on CNN Friday, she portrayed the Inabinett as "out of control." "Her whole face was terror and anger,” Conway said.
“My daughter was right there, and she ought to pay for that,” Conway said. “She ought to pay for that because she has no right to touch anybody.”
Conway said she waited months to tell the story because she didn’t “want it to become a thing” but hoped it can now become a “teachable moment.” She told the president, she said, and he reacted with concern for her and her daughter.
Copyright © 2019, ABC Radio. All rights reserved