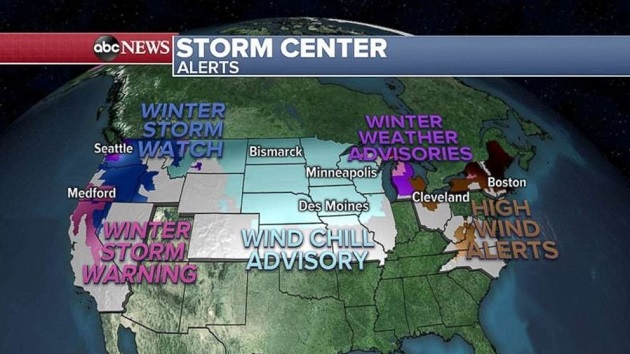 ABC News(NEW YORK) — Snow, ice and rain are wreaking havoc on roadways throughout the middle of the country.
Some roads are blanketed with up to 1 foot of snow and some drivers are crippled by blinding whiteout conditions.
Freezing rain has also coated streets, trees and power lines with ice.
In Minnesota, some roads were closed Friday morning from major snowfall and blowing snow, reported ABC Minneapolis affiliate KSTP-TV.
More than a foot of snow fell from Colorado to Michigan over the past several days, while freezing rain brought some areas from Missouri to Michigan to a standstill.
Power was also knocked out to Michigan residents.
Behind that storm is Arctic air, sending wind chills plummeting Saturday morning.
The wind chill — or what it feels like — is forecast to fall to 8 degrees in New York City; 1 degree in Syracuse; minus 3 degrees in Chicago; and minus 28 degrees in Minneapolis.
Meanwhile, on the West Coast, a new storm is hitting the Pacific Northwest.
A winter storm warning is in effect in Seattle until Saturday as the city braces for unusually heavy snow.
Seattle may see snow up to 6 inches and the suburbs could see over 8 inches. Wind gusts may reach 45 mph, which could lead to whiteout conditions on the roads.
A winter weather advisory is in effect through Saturday afternoon in Portland, where residents could see freezing rain and heavy snow reaching about 4 inches.
The heaviest snow will stretch from Seattle to Portland to Medford, Oregon, Friday night into Saturday morning.
In California, the Sierra Nevada Mountains could see 2 to 4 more feet of snow, even in some areas that saw a whopping 10 feet of snow just a few days ago.
Rain is forecast to move into San Francisco and Los Angeles on Friday and continues into the weekend. Some flooding and mudslides are possible after heavy rain earlier in the week.

Heavy snow across Rockies and Cascades, seasonable air returns to the Gulf Coast
Next storm to hit South and Northeast with snow, record cold temperatures in South
“I got my name back” — ‘Chappelle’s Show’ returns to Netflix, Dave reveals
‘Tough As Nails’ returns tonight for season two, hailing everyday heroes of the pandemic
Arctic air grips Midwest, very active weather pattern in Central and Eastern US
Arctic air locked in over Midwest as several snow storms move from Midwest to the East