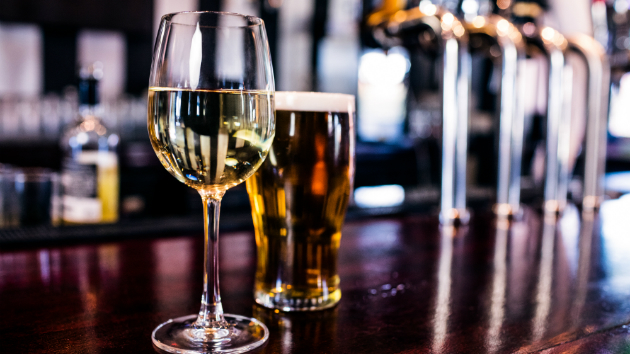 Wavebreakmedia/iStock(LONDON) — The old saying goes, beer before wine and you'll be fine — the next morning. But wine before beer?
Many folks have long said the order in which different types of drinks are consumed will affect one's hangover — in England, for example, there's the saying, "Grape or grain, but never the twain."
But a group of scientists now have said that's not true: The order in which drinks are consumed doesn't affect a hangover.
If you drink too much, the study showed, you'll still likely be in store for a rough morning after.
A joint study by researchers from the Witten/Herdecke University in Germany and the University of Cambridge in the UK put the old sayings to the test, using 90 volunteers split into three groups. One drank beer and then wine, another wine and then beer and a third drank only beer or wine.
A week later, the volunteer groups switched what they were drinking. The volunteers were asked to rate their hangovers based on common symptoms — fatigue, headache, nausea — and asked to rate their levels of drunkenness throughout a day's revelry.
The researchers, led by Dr. Kai Hensel, a senior clinical fellow at the University of Cambridge, found there was no significant difference between the three groups in terms of hangovers.
"We used lager beer and white wine. And we didn't notice any difference,” Hansel told the BBC.
"Using white wine and lager beer, we didn't find any truth in the idea that drinking beer before wine gives you a milder hangover than the other way around,” said Jöran Köchling from Witten/Herdecke University, an author of the study, which was published in the American Journal of Clinical Nutrition. "The truth is that drinking too much of any alcoholic drink is likely to result in a hangover."
Unfortunately, however, scientists have yet to find the ever-elusive "hangover cure" for which drinkers from time immemorial have been waiting.
If that finding comes as a disappointment for those of us who enjoy a drink or two, there is one ray of hope in the findings.
"Unpleasant as hangovers are, we should remember that they do have one important benefit," Hensel said. "They can help us learn from our mistakes."
Copyright © 2019, ABC Radio. All rights reserved.