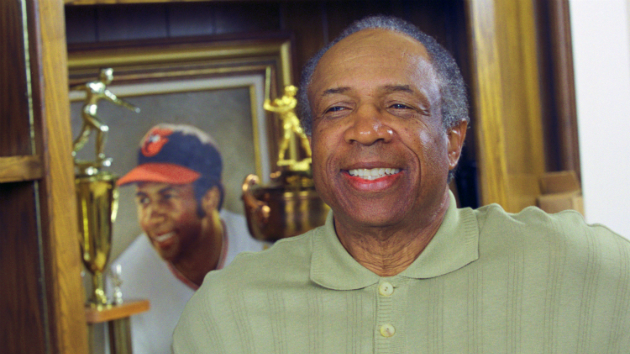 Bob Riha, Jr./Getty Images(NEW YORK) — Baseball Hall of Famer Frank Robinson has died at the age of 83, Major League Baseball announced on Thursday.
In a news release, the league said he “passed away [Thursday] morning at his home in California, surrounded by family and friends.”
Robinson was inducted into the Baseball Hall of Fame in 1982. He made history as the first player to win MVP in both the National and American League, and later as the first African-American manager in the MLB in 1975 with the Cleveland Indians.
"Frank Robinson's résumé in our game is without parallel, a trailblazer in every sense, whose impact spanned generations,” MLB commissioner Robert Manfred said in a statement. “He was one of the greatest players in the history of our game, but that was just the beginning of a multifaceted baseball career.”
Robinson also won the Triple Crown in 1966 with the Baltimore Orioles and helped the team win two World Series titles.
In 2005, he was awarded the Presidential Medal of Freedom, “the nation's highest civilian award, for 'setting a lasting example of character in athletics,’” Manfred said.
"We are deeply saddened by this loss of our friend, colleague and legend, who worked in our game for more than 60 years. On behalf of Major League Baseball, I send my deepest condolences to Frank's wife Barbara, daughter Nichelle, their entire family and the countless fans who admired this great figure of our National Pastime,” the commissioner said in his statement.
Copyright © 2019, ABC Radio. All rights reserved.